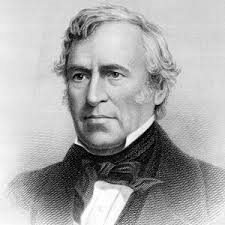 Zachary Taylor was much like William Henry Harrison: Both were war heroes whose military careers were much more interesting than their careers as president due to untimely illness and death.

Taylor, it is not surprising to learn, was born on a Virginia plantation. His father had fought in the Revolutionary War. When Taylor was still young, the family migrated westward in hopes of finding more open land. Taylor grew up in a small cabin in Kentucky before his family’s financial situation improved and they moved into a larger brick home. The Kentucky frontier had few schools, and Taylor’s formal education was sparse.

As president, Taylor faced the question of slavery and whether it would be allowed in the western states. The supporters and opponents of slavery were very vocal in their arguments, and the war hero without political savvy found himself overwhelmed. Although he owned slaves (and was the last president to do so while in office), he took a moderate stance, which enraged fellow Southerners.

Many historians believe that “Old Rough and Ready,” while a great commander, was unsuited for political office. It is possible that the stress of his new office contributed to his death. On July 4, 1850, Taylor attended a fundraising event at the Washington Monument and fell ill with unknown digestive problems, which scholars today believe was some sort of severe inflammation of the stomach and small intestine. On July 9, he declared to his wife that he had done his duty and was ready to go.

Since then, some have postulated the theory that Taylor was poisoned. However, his body was exhumed in 1991 and no evidence of poison was found. It is more likely that the open sewers of Washington, DC, may have contaminated his food or drink. Whatever the cause of his sudden death, Zachary Taylor will be remembered, if not for his presidency, for the long service he gave to his country on the front lines of battle.

Here are some business lesson we can learn from Zachary Taylor

At the Battle of Buena Vista, Taylor found himself outnumbered by hostile forces, so he dug in and fought, refusing to give ground. You can follow this example from a moral standpoint. You may find others who encourage you to indulge in unsavory business practices, but if you stand your ground against these unbecoming influences, you can come out with your integrity intact.

2. Be the Kind of Person People Want to Trust

After the Black Hawk War, it was Taylor who was given the job of escorting the captured Indians. During his career, he had built up a reputation as a person his superiors could trust, and when they entrusted him with the prisoners, he didn’t let them down. What kind of business responsibilities will you prove yourself able to manage? Proving yourself may take time and effort, but in the end, the right people will notice your strengths.

When his fort was attacked during the night by Indians, Taylor didn’t flinch or freeze up. Such a delay could have cost him the fort, since the Indians had set the storehouse on fire. However, Taylor acted quickly and formed a bucket brigade to quench the flames, simultaneously commanding the defense of the fort from the Indians.

In your business career, you will no doubt face crises great or small. You should decide now how you will react to them. Of course you don’t know the specifics of the crises now, so you don’t know exactly what to do, but you can know what sort of attitude you will have when the troubles come. Will your indecision at a time when swift thinking is important cost you your company? Or will you take charge and be the leader your company needs?

Zachary Taylor won at the Battle of Buena Vista in part because he managed to get the high ground and maintain his advantage over the attacking Mexican forces. You may need to rely on your advantages when you face difficult issues in your business career. What are you good at? What are your company’s strengths? You should figure out how to allow your strengths to compensate for your weaknesses—or you may need to simply strengthen your weaknesses.

5. Get Help When You Need It

Taylor was elected to the presidency with little formal schooling, so he consulted his friends to help him with his speeches and other presidential duties. You don’t have to do it alone! Surround yourself with useful people who can help in the areas where you’re weak. If your company is successful, it will probably be so because of the right combination of talented people, not because of any single person.

Among Zachary Taylor’s last words were, “I have done my duty.” Throughout his life, he had done what had been expected of him, both in the army and in the White House. His capacity to do his duty allowed him to achieve status as a war hero and gain people’s trust enough to be elected president. How can you do your duty? How can you show that you will do what is asked of you, no matter what?