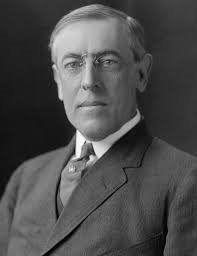 Woodrow’s father, Joseph Ruggles Wilson, was a devout Presbyterian minister who married the daughter of another devout Presbyterian minister. Although Reverend Wilson was born in the northern state of Ohio, he moved his family to Staunton, Virginia where he integrated the values and politics of the south. He believed in the South’s desire for secession from the union and helped create the Presbyterian Church of the Confederate States of America, then became its leader. At home, according to his mother, Thomas Woodrow Wilson was born sometime around midnight. Some sources list his birthday as the 29th but most record his birthday as December 28, 1856.

Less than a year after he was born, the family moved to Augusta where Woodrow, known as Tommy, grew up with two older sisters and a younger brother. As a young child, Tommy was a mama’s boy who clung to her skirt. Even though both parents were devoutly religious and somewhat strict, their mother, Jessie Janet took care of her husband and four children in a loving atmosphere.

Because of the war, schooling was predominately done at home with their teacher-father who was very strong willed. The children had lessons in religion, British history and literature. Reverend Wilson taught his children that it was God’s will that the South should have secession. For Tommy, education was hard because of his weak eyesight and problems reading, so he did not learn to read normal until he was ten years old. It is now believed he had some form of dyslexia. Later, his father taught him oratory and debate that became a passion for him. Away from his home school, Tommy loved playing baseball and exploring the countryside with his friends and cousins.

When Woodrow graduated with a doctorate in history and political science, he was offered a teaching position at Bryn Mawr College. In 1890, he accepted another professorship at Princeton University where he taught jurisprudence, the theory of law. He was a favorite teacher during his twelve years of teaching and published nine books. When he became president of the University, he obtained his dream job. Unlike all the previous presidents who had been clergyman, Woodrow Wilson was a man willing to change the institution into a liberal University. During his tenure, he changed academic standards, hired new teachers, turned large lecture halls into small group instruction using new curriculum.

For the first four years, the faculty and trustees supported his radical changes until 1906 when he wanted to change the status quo of the student elite. He favored common meals, common dormitories and combining the undergraduate and graduate buildings. Even though he was responsible for transforming the college into a prestigious university, he lost the support of school officials but gained a national reputation for educational reforms. These views helped shape his future presidency. Here are some business lessons we can learn from him.

1. Do Not Allow A Handicap To Be a Handicap

As a young boy, Tommy Wilson had a difficult time learning to read. He struggled with words until he was ten-years old when he finally discovered the concept of putting letters together and then stringing those words so they made a sentence. He did this under the handicap of having some form of dyslexia. As he grew older, he took that knowledge and studied to read well. He learned above and beyond what college had to teach him by reading extensively about British history and the law. Sometimes in business, we have to overcome mental challenges that otherwise would keep us from being successful. Whether it’s choosing a business that our handicaps are suited for, or overcoming challenges by pushing ourselves beyond our limits, we can rest assured that our handicaps need not be a handicap that keeps us from attaining our dreams.

2. Do Not Allow Redundant Ideas To Become a Handicap

Woodrow Wilson was the first President at Princeton University that was not afraid to make drastic reforms to an established church college that had been presided by clergymen. He changed a lot of the basic structure such as new professors, academic standards, and curriculum with smaller group sessions. It was his innovative changes that turned Princeton into a prestigious University that was sought after by influential families. Sometimes in business, we may get so comfortable with the status quo that we lose the vision of what fresh ideas can do to invigorate the company. The routine may bring in some profit but the businesses that create new customers are those not afraid to try new ideas. Sometimes it is imperative that we make drastic reforms if our profits show a steady decline. We can open our minds as well, so that we do not allow redundant ideas to become a handicap.

3. Do Not Allow Reform To Become a Handicap

Despite the dynamic progress that Woodrow Wilson made to Princeton University, he tried to sustain the reforms above and beyond what the alumni and school officials were willing to bear. Instead of negotiating with them, he fought for his ideas and lost their support. The same thing happened when he tried to establish the organization that became the League of Nations. Some in congress wanted to add amendments but President Wilson refused to negotiate the terms and lost the support of Congress who stopped his idea. Sometimes in business, we may develop reforms that work and improve our business. But we need to be careful to keep those changes within a framework that will be supported by those who will be affected. Good ideas that produce results are appreciated as long as we do not allow reform to become a handicap.

4. Do Not Allow Grudges To Become a Handicap

Woodrow Wilson was deceitful when he started a relationship with another women that broke the heart of his wife. Despite the tremendous toil on her emotions, she decided to support his presidency by remaining at his side and quelling rumors by inviting the “other woman” as the first White House guest. She made the decision to move forward and not let the past become an issue.

There will be times in business when someone offends our dignity and our emotions will cry out for revenge. But it is important to remember the big picture. Was the offense so devastating that it broke our rhythm of success or was the offense, as irritating as it was, a minor setback that gave us pause? There are some issues that are serious enough to warrant legal action. But most offenses are minor and we need to not allow grudges to become a handicap.

5. Do Not Allow Arrogance To Become a Handicap

World War 1 was the first war that mobilized many countries and entire societies with its economic base. The United States was no exception, once it entered the fray. President Wilson realized that the military, as strong as it was, could not win the war without the collaboration of the entire nation. He had no illusions that despite his role as President of the United States, he possessed all the skills necessary to mobilize a country on his own. For that reason, he delegated authority to special agencies, headed by men who were experienced in that field. Bernard Baruch increased industrial production by twenty percent. Hubert Hoover persuaded farmers to expand production so fast the United States was able to feed its own people plus the European Allies. Other special agencies worked to increase aircraft and ship building and provide necessary supplies. Men left to fight for their country and women took over jobs that were abandoned to keep the country running. The system had its faults and there were shortages, but considering the country was unprepared for war, the special agencies headed by competent men united the country into a cohesive whole. In business, a leader needs to know when to delegate authority. As a business grows and more employees are added to the roster, it is a disservice to the people if the owner adheres to a mindset that he is the only one who can make competent decisions. He becomes stretched too thin and workers become entangled in a disorganized atmosphere when there is only one leader. The business sags and begins to sink. It is important that business owners do not allow arrogance to become a handicap.