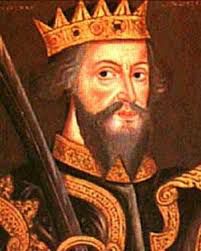 Known to history as William the Conqueror, he was known to his contemporaries, and enemies, as William the Bastard by virtue of being the natural son of Robert I, duke of Normandy, and Herleva, the daughter of a tanner in the city of Falaise. William was born c. 1028. Call him what you will William grew up to defeat the last Anglo-Saxon king of England and to become the first Norman King.

The history of Europe is filled with the names of prominent people who were born “on the wrong side of the sheets,” my favorite quaint term for those born out of wedlock. Although the situation was frowned upon and the children were often hidden or sent away to school in some very distant land, a goodly number remained at home or returned home and were able to prosper. William son of Robert (hence Robertson) was one of the fortunate ones. He was acknowledged by his father and placed in a position to succeed. In the modern era being born a bastard has little or no stigma attached to it and it certainly won’t keep anyone from being successful. There is no better feeling when the words “And Son” are added to the sign out front, or the company letterhead. In the final analysis it is what one does that has the greatest impact. Down through history we find evidence of this: Einstein was terrible at math, Ben Franklin was broke and hungry when he arrived in Philadelphia as a young man of seventeen. And so on. The desire to unite England and France in the 11th century grew out of the realization that the island Kingdom was not as cultured, as educated, nor as spiritual as her continental cousin. King Edward, the Confessor, might have promised his throne to William in an effort to bring the two countries closer together. As William never mastered the English language at least a part of the idea proved to be a good one as French words took their place in the English lexicon. As demographics change new niches open up around the globe. An astute businessperson will study those niches and find one that s/he thinks to fulfill, thereby giving a whole new set of customers exactly what they want.

2. Someone is Always Willing To Help

Matilda was not interested in marrying a bastard. William had other ideas. He didn’t sweep her off of her feet; he swept her off of her horse. The future conqueror had made his first conquest. And she turned out to be a valuable ally, proving again that the right relationship can be an enormous asset. A goodly number of people like to think that they work better alone and perhaps they do but it is always useful to have someone around who is willing to help iron out the rough spots. The truth is that no one person can do everything: business will not thrive in a vacuum and everyone has to sleep sometime. The IRS has explicit definitions of the different types of businesses. The description of the Sole Proprietorship says: 1) Limited source of capital. 2) No limited liability for the owner. 3) No continuity past the owner. None of this is life-threatening but it is important to remember if one desires to build something that will last. With a well-developed plan of action in hand it shouldn’t be too difficult to find someone who is good at marketing or sales or emptying the trash.

As the first Norman king of England, William had his work cut out for him. The plan to, effectively, modernize the primarily Anglo-Saxon island met with opposition at every turn. William was brutal because he had to be. “The years of storm and stress through which he passed [growing up] gave him an endurance and far-sighted resolution of character which lasted until his death,” so history tells us. And he needed all of it to whip his kingdom into shape. A corporate merger very often has the same effect. Although heads don’t literally roll in this day and age people will lose their jobs, be replaced by those the new management thinks are “better suited.” In a goodly number of cases management is wrong. One is rarely better suited to do a job that someone else has done for years. The requisite learning curve is going to put a large dent in the bottom line. Especially if the two businesses were initially not well-aligned. Case in point: when a printer manufacturer acquires a computer company it may seem to be a good idea but when the printer manufacturer in fact knows nothing about making computers things won’t go well for a while. Being prepared to deal with crisis is a good indicator that everything will work out for the best. Eventually.