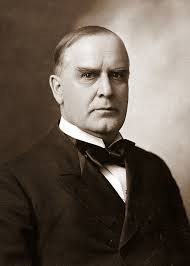 Nancy Allison McKinley bore her seventh child, who was a son, on January 29, 1843 in Niles, Ohio. He shared his father’s name, William McKinley. When the baby grew up to be nine years old, she moved with her children to Poland, a town about seventeen miles distance. William Sr. wanted his younger children to have a better education and Poland had more opportunities. He was often away on business but the mother decided she could move and she did. Every weekend the father would ride horseback to see them and help with chores. When he was gone, the family hauled water, chopped wood, hunted game, and grew vegetables while the younger children attended school.

William’s job was to drive the milk cows morning and evening. He also worked on other people’s farms, wood lots and cow pastures to earn money for his family. His love for his mother drove him to be good. She loved each child, saying there were no black sheep in her family. Each night, the family took turns reading stories from books and old magazines. William grew up normal, and happy, even in school where learning intrigued and challenged him. Here are some business lessons we can learn from him.

Nancy Allison McKinley was President McKinley’s mother. She exemplified the strength of a woman who was willing to sacrifice. She had nine children and had the courage to move away without her husband for the sake of her children’s education. It was a time in history when physical labor was needed to haul water, chop firewood, hunt meat, grow vegetables, cook food from scratch, and wash clothes by hand. Although she had children to help her when they were not in school, she was the ultimate source of food and warmth. Likewise in business, sometimes it becomes necessary for us to take the responsibility of managing and building a business alone. Although we might have support from family or friends, we are the ultimate source of keeping the business alive and growing. We go without sleep first, we pay ourselves last. It is one of the mottos of a successful business “we expect to make sacrifices.”

2. Expect to Be Strong

When the civil war started, William McKinley was the first male from his community to enlist. On the battlefield, he showed great courage many times. One battlefield in Maryland has a statue dedicated to his memory. On that particular day, the men were fatigued, thirsty, hungry and low in spirit. He passed under fire many times to serve hot coffee and warm meat to every man in his regiment. Rejuvenated, the men were able to fight again. In business, there will be days when others will need us to be strong. Whether hardships are from their personal life or professional life, others can become tired and low in spirit. If we are observant and compassionate, we can be a source of strength and rejuvenation. When we help others in our business, they in turn, can become our source of strength.

When William McKinley married the vivacious and vibrant Ida Saxton, he had no idea disease would destroy her lovely countenance. There were times when her eyes would be filled with pain or become dulled from medication. She lost her youth to disease and sometimes became a petulant shrew. While attentive to her needs, William McKinley never let it get in the way of his job as Congressman that led to him being President. Despite the many setbacks we have in business, some due to family life, we can roll with the punches and accomplish what needs to be done. In spite of family problems, successful business owners go to work and create a good job environment for themselves and their associates. When they go home, they give their full attention to family situations so they can return to work and become more productive.

5. Expect That Some People Will Default

William McKinley trusted his friend Robert Walker, who he had known all his life, by signing bank notes that stated he would be responsible to pay any debts left by Mr. Walker, who was a manufacturer. The business went into bankruptcy and McKinley was required to pay $130,000 or the equivalent of 2.5 million dollars. It never occurred to him not to pay the loan, only how he was going to do it. He decided to give up politics and work as a lawyer. In business, there is always the possibility that others will not pay us what they owe. An even bigger threat is that we will owe someone else and find it a hardship to pay our bills. If we have a mindset that the first monies we earn belongs to our creditors, then we will have a greater chance of our business surviving.

William McKinley grew up in an era that believed all other races were inferior to European descendants. He believed assimilation into the American lifestyle for the Filipinos and Native Americans would improve their lot in life and saw no need for them to be self-governing since they were too uncivilized to manage a government. In modern business, we will meet those who believe in the superiority of their own race because they judge from that perspective. They are positive that theirs is the right way and reject everyone else as inferior because they do not share the same beliefs and values. In business, it is important to understand that a diverse society is not a wrong society, just different. In business, it pays to learn, understand, and tolerate others. Expect to meet ethnocentricity but do not become a part of it.