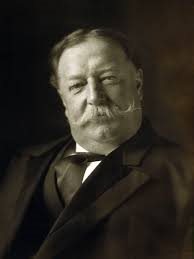 At the time of his birth, William’s father was Alphonso Taft, who was a lawyer and was helping to establish the Republican Party in Cincinnati. His father would go on to serve in prominent political positions such as state judge, secretary of war, U.S. attorney general, Ambassador to Austria-Hungary and minister to Russia. Previous to William’s birth, his father had been married to Fanny Phelps who had died but left two sons. One became the publisher of the Cincinnati Times-Star while the other one became a member of the U.S. House of Representatives. Eventually, all his sons would graduate from Yale University.

William’s mother was Louisa Maria Torrey whose father was a judge. Her first baby boy died when he was 14 months old from pertussis. Her next baby boy, William, was born a big baby and he remained physically huge the rest of his life. The rest of her children were Henry who became a lawyer, and Horace who was the founder of the Taft School. The last child was a girl who grew up to marry a surgeon.

As a child, William was known as Will. He had a very congenial personality that made him popular. He grew up with fair skin, light hair and blue eyes. He was raised on the expensive side of Cincinnati and had a happy childhood. His friends were from the neighboring hills who considered themselves a gang. They fought battles, played baseball, went swimming and skating. During the summers, he and his four brothers went to see their grandfather in Massachusetts. They cut wood for him to help pay their vacation. His father’s side of the family was Unitarian and Will clung to that religion all his life, setting a foundation for his future as President. Here are some business lessons we can learn from him.

1. Prepare to Be Genial

Will had a genial personality that made him popular as a student in school and in college. His friends felt comfortable giving him the name of Big Lug. Will had a sense of humor about his weight and had a hardy laugh when someone told him he was the most polite gentleman there was since he had given three women his seat. Important positions were handed to him several times because of his congeniality. Despite our personality style, it is possible to become more comfortable in the presence of others. Some may have to work harder to be more flexible but the rewards will be obvious. Better business relationships will enhance communication and improve the work environment. Others will work harder if they feel they have a rapport with their boss who was prepared to be genial.

2. Prepare to Benefit from Allies

Nellie, for her own reasons, supported her husband in every position he attained. She was his greatest ally in assuring his success. Three presidents offered him important positions that helped him move forward to the presidential chair. For their own reasons, they needed his genial personality for delicate missions to pacify affronted foreign nations. In business, we need to recognize those individuals who, for their own reasons, are willing to invest themselves in our business. By accepting and rewarding their services, our burdens are lighter, our responsibilities less stressful, and our decisions are filtered through different perspectives. As the person in charge, we will lose the benefit of those who are talented with useful skills, if they intimidate us. To be successful, we need to prepare ourselves to benefit from knowledgeable allies.

After William Howard Taft had been Chief Judge of the Superior Court in Cincinnati, U.S. Solicitor General, and judge of the Sixth U.S. Circuit Court of Appeals, he returned to school and obtained a Doctorate. His new degree qualified him to become a professor and Dean of University of Cincinnati Law School. Even after having the gumption to start a business and the knowledge to profit from it, we can still benefit from further education, formal or not. In any business, there is a level of deep understanding that takes years to acquire. We can speed the process by educating ourselves so that our business can thrive without being handicapped by inapt decisions. We avoid financial ruin when we prepare ourselves to keep learning.

4. Prepare to Take Advantage of Assets

President Taft was a huge man that stood over six feet tall and weighed over three hundred pounds. He could have hidden himself away and mourned his stature. Instead, he used it to his advantage. He used his largeness to represent the power of the United States. Foreign dignitaries were awed by his presence and saw superior strength when, in reality, he was a gentle man who wanted to avoid conflict. Whatever our assets, we need to take advantage of them to start our business or help it grow. There are many programs for women, minorities, the physically challenged, and economically handicapped that can benefit from these programs. At the same time, we need to surmount any challenges that we have and not allow them to halt our progress. For the sake of our business or working life, it is up to us to see any handicaps as assets and prepare to take advantage of the assets we have.

5. Prepare to Use Intrinsic Talents

Helen was a very organized, proactive person and public relation was her strength. She would have made a powerful president had women been allowed to hold the presidential office. However, her talents and skills were utilized as First Lady. She created drastic changes to the social order of the elite. She hired African-American men to work as ushers at the White House. She included divorced individuals and all ranks of the military and low cabinet members and their families to attend White House socials. She created the West Potomac Park and filled it with thousands of Japanese cherry blossom trees to beautify the grounds for public concerts, where poor and wealthy could attend. She helped reform better working conditions for laborers. She became an advocate for women suffrage. She loved using her talents and skills as an influential First Lady.

6. Specialize in Your Interests

William Howard Taft had great skill in writing court opinions and appellate decisions. He had a knack for organizing details into a coherent whole. He thrived in the judicial atmosphere and his greatest desire was to become Chief Justice. However, he married the very ambitious Helen Herron who veered him from judicial appointments to executive ones. After an unhappy presidency and being labeled a misfit president, he was given a third opportunity to serve in the Supreme Court where he made a name for himself and happily worked for nine years. Let that be a lesson to all of us in business that we need to choose a specialty that holds our interest and where our skills will be recognized. We all have intrinsic abilities that can benefit our working lives but we need to recognize our fortes and choose paths that prepare us to use those intrinsic talents.