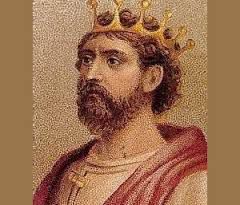 Researching William De Warenne revealed a Who’s Who of British nobility. There have been no less than four Earls of Surrey with that name. The William we profile here was the 1st Earl of Surrey. In fact, the position was created for him in 1088, as a reward for his service, by William II (the third son of William I of England; King of England from 1087 until 1100, with powers over Normandy, and influence in Scotland; commonly known as William Rufus or William the Red, perhaps because of his red-faced appearance). William de Warenne was one of the few whose name was documented as being among the army of William the Conqueror at the Battle of Hastings in 1066.

William did not come from a particularly wealthy family and had no prospects of inheriting any part of his father’s lands. His loyalty to the Duke of Normandy paid off when said duke became William the Conqueror. And the rest, as they say, is history. The drive to succeed comes from within. Having money in ones pockets at the outset may be a good thing but will not take the place of constant vigilance – always alert to the next possibility. Real estate is an invaluable commodity because, once obtained and paid for it is the base upon which any enterprise can be built.

The practice of arranged marriages has gone out of style in most of the modern world although people still marry for money if they can. While seemingly an awkward thing to do in personal relationships such activities point out their usefulness in the business world: William de Warenne joining in the Battle of Hastings, artists and sculptors seeking the support of wealthy patrons, businessmen joining together to form companies and corporations. The world of acquisition and merger has existed since the second caveman asked the first caveman to work with him on supplying food for the tribe. It is wise, though, to be wary of alliances; take the time to get to know the prospective co-worker. Men have been known to lose their heads when relationships turn bad.

3. Be Prepared, Be Flexible

As much as we wish it were not so no one can predict the future. We can prepare and there are whole shelves in the library filled with books on emergency preparedness; however when the future becomes the present there are always going to be a few surprises. Mothers look at their newborns and think “future president” or “future movie star” or “future something else stupidly wealthy.” There are still places in the world where mothers look at their children and wonder if they’ll survive the day, the month, or the year. Even the most diligent education, the most rigorous training will not protect one from the meteor, earthquake or drunk driver. William de Warenne could have died in any number of wars and military actions. He could have fallen off of his horse. He was shot in the leg during a battle against the Scots but he survived that. Life is perilous but that should not prevent us from living. The business world is about as stable as any house built on sand, so firm up the foundations and keep laying those stones. Luck is as prevalent a factor in success as skill, knowledge and determination. That old “right place at the right time” adage has played as big a part in building this planet as anything else. The bottom line is that we all have to do something. Find out what you’re good at and don’t let anyone tell you it can’t be done. They said that about the ark, the wheel, the telephone and the computer. You may not become one of the World’s Richest but that doesn’t mean that you can’t have a good and rewarding life.