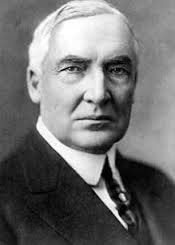 Warren Gamaliel Harding’s parents started out as farmers, then both became doctors after having children. The Hardings were living in the small town of Corsica, Ohio when Warren was born on November 2, 1865. As the first child in the home, his mother called him Winnie. When he was ten, his family moved to the village of Caledonia. He had a normal childhood that was filled with farm chores, swimming in the creek, and playing with friends. Eventually, he became the oldest of eight children. He learned the basic skills of reading, writing, and spelling in a one-room schoolhouse along with his siblings.

His father, George Tryon, left farming to become a part owner of the local newspaper and then read books to become a doctor. His mother, Phoebe Dickerson, received a medical license and also became a doctor due to her experience as a midwife helping her husband. As a child, Winnie got along with everyone. As a young man, he was so congenial he never said no to his friends. His father teased him that if he had been a girl he would have been in a family way all the time.

At the age of fourteen, he went to school at Ohio Central College where he was an average student. The only talent he displayed was being the editor of the school newspaper. Three years later, in 1882, he graduated and moved to Marion, Ohio where he ended up with a reporting job at a newspaper. In 1884, he and two friends gathered three hundred dollars together to invest in a failing local newspaper, the Marion Star. They had reasonable success but not enough to keep the other two involved. Warren became the sole owner.

His stature was tall and handsome with a winning personality. Warren was a ladies man. He played coronet in the town band, and went skating, but his passion was poker. He made a name for himself as an orator for the Republican Party and gave speeches at county and state conventions. Warren was given the honor of presenting a speech at the Republican Convention to nominate William Howard Taft for president in 1912. Three years later, he was elected to the U.S. Senate and followed his previous record of not taking a strong stand on any issue but following the Old Guard Republican’s agenda. Here are some of the business lessons we can learn from him.

1. Do Not Be Disloyal

Warren Harding had a desire to be liked. He had a natural charm that people were attracted to and his mannerisms led others to believe he was an honest friend. Yet underneath that exterior, he was willing to be disloyal to a longtime friend by having an affair with his wife for fifteen years. In business, there are a number of ways to be disloyal. Whether it is against another person such as a partner, associate, customer, or to an entity such as the company, honesty is the best policy. Disloyalty can break up business friendships and relationships but it can also create enemies. The less negativity we have in business, the more freedom we have to concentrate on the business itself instead of tying ourselves in knots by trying to settle disputes. Anytime we have a choice, choose not to be disloyal.

2. Do Not Misuse Authority

When a pretty, teenaged girl named Nan Britton asked Senator Harding for a job, he pulled strings and she was hired in a secretarial position by the U.S. Steel Corporation in Washington D.C. Had he left her to do her job, she would have had many options open to her. Instead, he made visits to her and she got pregnant that left her with one option, to start out her adult life by being a single mother. She wrote a book about the affair and destroyed the reputation of the dead president because he misused his authority when she was an innocent teenager. Even though present day laws help protect the vulnerable, there are many ways a business leader can misuse authority by demanding adherence to unfair business practices. The leaders do not need to kowtow to the workers, but it does require them to be fair and honest. If not, resentment and revenge can build up in those who feel taken advantage of. If the court agrees, the law can destroy a business so it is wise not to misuse authority.

During his political career, Warren Harding was a follower who did not take a stand on important issues. Even his votes were given to those in charge. As a result, he made many friends; however, he was untrue to himself. Because he was a follower, he did not study the issues so he could make up his own mind which direction was best. Because he was a follower, he did not build the skills of leadership that were necessary for the top job of president. He lacked the insight to prevent corruption and the strength to abolish it. In business, it is sometimes an advantage to be a follower. But leadership positions require a leader mentality. Leaders know the issues, have the ability to adjust for them, can rein in subordinates, and keep production flowing in a positive direction. Being a follower creates a drifter who follows different people in different directions. Being a leader creates a chosen path and a strong personality to forge it. Do not be a follower.

4. Do Not Ignore Competent People

President Harding was lucky to have four extremely capable men on his cabinet. They accomplished important tasks that gave some credibility to his administration. The disarmament conference replaced the League of Nation—that was not ratified by congress—to move towards world peace. One of their foreign policies enabled the United States to interact in the world’s economic structure to secure foreign products such as oil and rubber. In any business, there are workers who excel at their jobs because of experience, intelligence, and common sense. It is imperative that leaders take notice of such individuals who are usually hard, conscientious workers. They can benefit the company by using their talents to make the business grow if given the right opportunities. Often, average supervisors keep them hidden until the good worker leaves to find better opportunities. Do not ignore competent people.

The reason President Harding was considered the number one worst president was because of his weak leadership. Some people called it lazy while others called it a need to be liked. In the beginning, he started out well liked and respected. With his wife supervising the weekly newspaper, he was considered a successful businessman who became a member of several corporate boards, fraternal organizations, and charitable enterprises. As a state senator, he blended in by following the most important leaders who considered him one of the Good Ole’ Boys. He avoided confrontations by being absent from important debates and hearings. Members of congress were impressed that he had no enemies so they nominated him as their third choice for president. The problem was, standing alone as the most important man in America, he lost the shield that his wife and members of the senate had provided him. His position put him in the spotlight where he was required to take a stand on important issues, be strong in national and foreign policy, and lead a nation with a multitude of politicians. To do that, he selected members of his cabinet that became divided into two groups. The first one was made up of powerful men who proved to be effective in transforming their agencies for the better and creating substantial legislation.

President Harding’s weak leadership skills manifested itself by his selection of the second group of men, his buddies from his poker games. These men had no sense of obligation to the American public and no desire to make the president look good. Greed was their motivation and they had hit the jackpot. Through intimidation, under the table deals, and kickbacks using government properties and power, the group usurped authority from the President under his nose. The same thing can happen in business when the leader is unavailable or not in charge. Strong personalities have the advantage of becoming the leaders except their goals may be different from the companies. Bankruptcies, license forfeitures, and embezzlements have been some of the consequences of weakness. It is imperative to not be a weak leader.