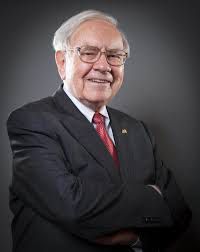 Warren Buffet is one who needs no title in order to be recognized. Indeed, he is perhaps the most successful investor of the 20th century. He was born on August 30th, 1930 in Omaha, Nebraska. Who would have known this baby would be an American business magnate, investor, and philanthropist? There is much to be said about his achievements. Warren Buffett is the primary shareholder, chairman and CEO of Berkshire Hathaway, a company that does only one thing, investing. Buffett is consistently ranked among the world’s wealthiest people; the world’s wealthiest in 2008, and the third wealthiest in 2011. In 2012, Time Magazine named Buffett one of the most influential people in the world. “Wizard of Omaha,” “Oracle of Omaha” or the “Sage of Omaha” are all names attributed to Warren Buffett. He contributes a lot of his energy and resources to philanthropic causes, and has promised to give away his fortune, 83% of which will be given to the Gates Foundation.

The second of three children, Warren was the only son of U.S Representative, Howard Buffett. He started his education at Rose Hill Elementary School in Omaha. In 1942, his father was elected to the first of four terms in the United States Congress. His father’s new occupation led to his family moving to Washington, D.C. where Warren finished his elementary education.

When he was young, he and his friend bought a used pinball machine and placed it in the local barber shop. This was not homework far from asking his parents to laud him with cash. At young age, kids don’t often do something that is not fun for them. Warren Buffet thought earning money by means of a pinball machine would be fun. Perhaps, he was interested in applying business theory to real life.

At age 20 he had saved $9,800, which after adjusting for inflation would amount to a hefty $94,000. Earning money and saving money should go together. This is because earning money is not buying something right now, but building ability to perform later.

3. Care about how you spend money.

The main goal of a company is generally to generate a profit. However, his goal was different. As a philanthropist, he contributes his wealth to the world. We do business for our well-being, but we should remember that we can generate more well-being for mankind.

4. Overcome the recession, and become stronger for it.

Most businesses went through a recession in 2010. Stock values went down and business fell into pieces. Warren Buffett had also lost a lot of value on his stocks, but he aimed to recover and finally brought in an even greater value with his stocks. Hardship can be another chance.

The reusable energy industry has been investigated extensively in order to preserve the Earth. This industry requires high levels of technology and has costly financial implications. Warren Buffett has launched several research projects.

A very common business strategy among the wealthiest of people is to look broadly. In fact, Warren Buffett has made many international investments. He even invested in a Chinese company. The advantage of global business is that of having a wider market.