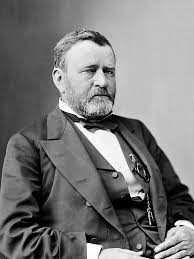 Hiram Ulysses Grant was born in Point Pleasant, Ohio, in 1822 in a small but tidy home on the banks of the Ohio River. Much like the child born there, the house was resilient and still stands today. In the fall of 1823, the family moved to the village of Georgetown in Brown County, Ohio.

Young Hiram was strong but rather disliked hard work, though he did what was asked of him. At seven he drove his family’s wood-laden wagons from the forest to the house. When he was seventeen years old, he was sent to the United States Military Academy at West Point, thanks to a nomination by Congressman Thomas Hamer, an associate of his father. Hamer mistakenly nominated him as "Ulysses S. Grant of Ohio." Grant found he liked the new name and didn’t bother correcting anyone when the clerks put the name into the official records. Hamer had used “S” to stand for Grant’s mother’s maiden name, Simpson. His academy friends suggested that the “S” stand for Sam, making the initials "U.S." stand for "Uncle Sam.”

At first Grant didn’t relish the idea of a military career. Grant himself later said "a military life had no charms for me.” Grant, then only 5 feet 2 inches and weighing 117 pounds, unenthusiastically pursued his military studies. He graduated twenty-first in a class of thirty-nine; part of Grant's demerits were due to his refusal, at times, to attend church, which was then a mandatory policy. He considered religion to be a private matter between an individual and a divine being, not a government or education matter. However, he distinguished himself as a horseman, training under a famed Prussian horse-master. He set an equestrian high-jump record that endured for twenty-five years. This was still not enough to lure him into a long military career, and he planned to resign once his compulsory service was done. He said that his graduation from West Point was of his happiest times.

Despite his reluctant beginning, the Civil War helped Grant to become and hero and later win him the Presidency. Here are some lessons from Ulysses S. Grant.

1. Do What’s Right, No Matter the Financial Cost

As a believer in the evils of slavery, Grant found himself with a dilemma. His family was in dire need of money, and his one slave could fetch a high price. But Grant couldn’t allow himself to sell another person, so he freed the slave instead of selling him. Sometimes the most lucrative path isn’t the most ethical one. It’s up to you to choose money or moral satisfaction.

Is a problem sitting in your way? Have you tried all of the obvious solutions? Maybe you need to take a lesson from Ulysses S. Grant. When a crucial fort left the Americans stymied, he dragged a cannon to a lofty perch and fired it from on high, surprising the enemy enough to give the Americans the advantage. You can try looking at a problem from other angles when you find yourself in a tough situation.

3. Listen to Your Friends

Grant felt snubbed after he was demoted following a particularly bloody Civil War battle. He was on the verge of quitting the army, which may have had tragic consequences for the Union army and the country. Instead, he listened to the advice of his good friend William Sherman, who urged him to swallow his pride and stay with the army. Sure enough, it wasn’t long till Grant rose in the ranks again.

Surround yourself with good friends and business associates, and carefully consider their advice. Sometimes others can see you and your situation more clearly than you can see yourself.

You must pay your debts when they are owed. Nobody trusts a businessman who can’t pay his debts. Sometimes the short-term cost may seem too high, but if you fail to pay your debts the long-term effects can be catastrophic. People’s trust can be worth more than money, and often it can actually lead to more money. Despite his grim financial situation after losing his money to a crooked businessman, Grant paid his debts. He had to use his Civil War memorabilia to do so, but he did it.

If a project is important to you, don’t let anything slow you down. If you are passionate about the success of your business ventures, stay with them until the end. Grant developed throat cancer, but even in great pain he continued to write his memoirs, which proved to be worth the effort.

6. Nobody Likes a Sore Winner

Grant had just defeated General Robert E. Lee in grueling attrition over long months of hard battle. When they met at Appomattox Courthouse, Grant could have gloated over his victory to Lee. But of course he didn’t. He treated Lee as a friend and fellow soldier. He was simply happy to have peace.

When your business career gives you triumphs that are denied to others, you have the choice to gloat or be professional. If you get a promotion, don’t dangle your success in front of others or boast. Success is fickle, and soon you may be on the undesirable end of a bad deal or miss out on a promotion.

7. Do Your Part, Even If You Aren’t Where You’d Like

Chances are you won’t start out in your most desirable job. Grant didn’t. Though he wanted to be an officer on the front lines of the Civil War, he was assigned to train troops. However, he did his job with gusto and was respected by the troops. Later, his hard work paid off when he was rewarded with a commission as colonel.