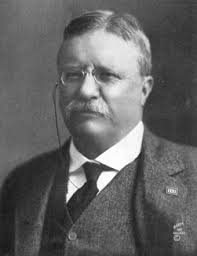 Unlike many of the previous presidents, Theodore Roosevelt was born in luxury. His ancestors were Dutch immigrants who came to America in the seventeenth century. His father was a wealthy merchant who was a philanthropist that was directly involved with his charities. He believed that good fortune had to be balanced with work and service. He was a good father, taking his children on routine excursions and extended trips.

Theodore Roosevelt was born on October 27, 1858 and the only president to be born in New York City. He had two brothers and a sister. In his childhood, he suffered asthma and other ailments. Many nights, his father took Teddy on carriage rides thinking the fast night air would help clear his lungs before putting him to bed in their elegant brownstone home. The children were home-schooled and part of their education involved traveling outside the United States such as Europe and the Middle East. At one point, the family hired a river barge for a long trip down the Nile River hoping the moist air would help Teddy’s breathing.

The doctor’s discovered he had a weak heart and advised the father that his son should prepare for a desk job. When he became a teen, Teddy’s father developed a physical regimen that included boxing and weightlifting and had a gym built for him in the house. When he started exercising vigorously, his health problems subsided and he began to live a normal life.

Part of his home schooling included a series of tutors, including his aunt. He was rumored to be a speed-reader and could finish reading a book in a day. He entered Harvard at the age of 18 and was known for his energy and enthusiasm that offended other students. During a time when young men were expected to act like proper gentlemen, his mannerisms were often flashy. Theodore would embarrass some of his friends with his exuberant greetings from across the yard that was considered uncouth. Instead of walking, he seemed to always be running. In sports, endurance was an important goal. Although he did not excel in sports, his courage and determination in boxing won him some fans.

In 1898, when the United States declared war on Spain, Roosevelt and Leonard Wood, an army doctor, asked permission to raise a horse regiment. Once granted permission, Doctor Wood became Colonel of a volunteer cavalry and Roosevelt became Lieutenant colonel. They called themselves the “Rough Riders. There were 1250 men from all over the country, cowboys and Indians from the west mixing with athletes and sportsmen from the east, but they could all ride a horse and shoot a gun. This led to his fame and ultimate presidency. Here are some lessons we can learn from him.

When Theodore was a child, his asthma became so severe at times that his father had to take him on carriage rides to force air into his lungs. As he grew older, different remedies were tested but the best solution turned out to be exercise.

Once he learned the benefits of sports and physical pastimes, he remained active for the rest of his life. The stress of participating in modern business places a lot of strain on our health. Numerous health issues have been scientifically studied and the majority of symptoms are found to be lessened with routine exercise. Not being physically fit leads to less productive work. The tendency of bad health is to do less work with less quality. Instead of overcoming business challenges with vigor and drive, the less healthy ignore or placate tough situations with easy solutions that undermine the integrity of the business. Strive to maintain good health.

2. Strive to Maintain a Healthy Attitude

As a young man in college, Theodore met an elegant young lady of his dreams. Because of his abrasive behavior, he frightened her and she rejected him. When she did, he went into despair and stopped being productive in education, sports, and friendship. Due to the seriousness of our business ventures, going into despair will delay or stop the production of our business. Decisions based on cool intellect can generate sound judgments whereas decisions based on negative emotions can create superficial decisions that can damage the growth of the company. Management will suffer, but laborers will feel the effects of it too, so it is essential to maintain a healthy attitude.

3. Strive to be Energetic

In the early years of this country when aristocrats had powerful influence on the mores of this country, they set themselves apart by learning and practicing a set of etiquette that they considered above common behaviors. One of the rules was having a proper manner in public that was reserved. Theodore Roosevelt was described as energetic, enthusiastic, flashy, exuberant, fervent, powerful, vigorous, excited, forceful, and dynamic. Yet it was those qualities that elevated him to be considered a great president. We might not be as wealthy and as powerful as he was, but we can be energetic about the progress we have made. To be less is to short change our potential and stifle the growth of our business. In a modern world where success can be determined by our personality, it is important that we strive to be energetic.

4. Strive to have a Business Agenda

Theodore Roosevelt was driven by a need to suppress favoritism and enforce equality in the work place. He insisted jobs be given to the most qualified and promotions be given based on merit, not prestige. By having this agenda, he made political decisions that were consistent and expected. Those who placed him in office through appointments or votes were aware the direction his agenda would take. His strong stance excited voters who wanted a strong leader and gave confidence to people as a whole. Business leaders who want the respect and confidence of their employees must have an agenda that can be followed. Promotions based on merit and pay that reflects the efforts of the workers gives a sense of security to a business. Without a firm policy that establishes the atmosphere of the company, workers can become disgruntled. It is imperative that business leaders strive to have a business agenda.

When the United States declared war on Spain, Roosevelt was not content to be an observer. He and Leonard Wood, who was an army doctor, took matters into their own hands and created a volunteer cavalry known as the Rough Riders. It was a unit that misfits could join as long as they knew how to ride a horse and shoot a gun. Indians, cowboys, athletes, and city sportsmen went to war in a group and became a heroic team. Sometimes business situations call for action that is beyond the scope of an ordinary day. A lot of times, people in the organization have strengths that are not exhibited in the work schedule. During emergency situations or unusual circumstances, it is wise to accept help from those who are willing to step beyond their stations. Business leaders will recognize natural leaders if they strive to find people’s strengths.

6. Strive to Make a Difference

Although most presidents accomplished significant improvements in their administration, President Roosevelt was considered one of the great presidents because his accomplishments were long lasting. The breaking up of monopolies, construction of the Panama Canal, expanded powers of the presidency, powerful Navy, ecological conservation, and regulation on consumption products were only a small portion of his legacy. He was gifted with foresight and made decisions accordingly. In business, we need to look beyond today and think into the future. The decisions we make can have long lasting effect, Whether in the working lives of the employees, in the production of products, or the relations with customers, our businesses have a better chance of flourishing if we strive to make a difference.