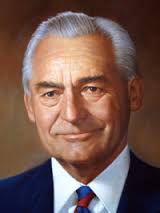 Samuel Moore Walton was born in Kingfisher, Oklahoma, on March 29, 1918, the first child of a rural banker, Thomas Walton, and Nancy Lee Walton. He was an Eagle Scout, quarterback of the state champion football team, and student council president. He was voted "most versatile boy" by his graduating classmates at Hickman High School in Columbia, Missouri, in 1936. Working his way through the University of Missouri at Columbia, he delivered newspapers, waited on tables, and clerked at a five-and-dime store while taking classes in the Army's Reserve Officer Training Corps and serving as president of the senior class and the honor society. After graduating in 1940 with a degree in economics, he worked briefly as a management trainee in Des Moines with the J. C. Penney Company, then a small-town retailer with 1,500 stores. During World War II, Sam Walton served as an Army captain, working in intelligence. In 1943, he married Helen Robson on Valentine’s Day. In 1945, he acquired his first store, a Ben Franklin franchise in Newport, Arkansas, with a $25,000 loan from his father-in-law, Leland Stanford Robson, a small-town Oklahoma banker. This was the perfect foundation for what Sam Walton was about to do with a simple ideology that would transform the retail business forever. The idea was that large discount stores could thrive in small towns and rural areas by helping customers, cutting costs, and sharing profits.

Sam Walton, founder of the retail giant Wal-Mart, will go down in history as one of the greatest entrepreneurs of all time. Although he started from the simplest beginnings in the retail industry, he was able to capitalize on opportunity after opportunity in order to grow to the company it is today. What did Sam Walton do to achieve such success? Sam Walton’s number one attribute was that he was 100% invested in what he did as an entrepreneur. He was the first one in the office in the morning and last one to leave. Even when he was home he was constantly brainstorming how to improve his business model and increase value for the customer. His optimistic attitude was contagious in convincing his partners and employees that there were no barriers they could not overcome.

We all make mistakes that we regret, but do we dwell on the past and keep on wishing we had chosen more wisely or do we move forward with the attitude that we will do better next time having learned from the experience? Hopefully you chose the latter. It is essential to make mistakes and more importantly, not only make mistakes, but learn from them. Sam Walton made his fair share of mistakes early on, but he learned from them and they helped him prepare to be the business man he is as Wal-Mart emerged as a fortune one company.

Many people view difficult challenges as negative and something that should be avoided, but what they do not realize is that this is the only way to grow. Sam Walton seemed to welcome challenge because he knew how to establish goals and achieve them. Sam had a knack for a bright vision of the future and was never bogged down by the present. Even during the most difficult time of his life he was achieving great feats of business when others would have thrown in the towel and given up.

Sam Walton was all about fostering unity among his workers. To assist the workers in catching the vision of unity he would personally visit the stores and see how their culture was working to achieve their goal. Much of what the current Wal-Marts have as motivational statements come from what he found in his travels from store to store. As these motivational statements permeated all levels of the company the vision of unity and the customer is the standard of all stores both local and abroad.

One of Sam Walton’s most admirable philosophies was his belief in sharing his wealth with the customer. He strongly believed in the trust between the store and the customer and was dedicated to trickle down profits to help customers save so they could live better. This philosophy has perpetuated even to this day and most likely will continue as long as the company exists.