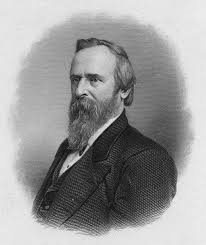 Rutherford Birchard Hayes’ early life was mostly unremarkable. He grew up without a father, though his uncle Sardis Birchard stepped in and acted as a surrogate father. He went to school in near his birthplace in Ohio, then went to college in Connecticut, where he studied Latin and ancient Greek. He graduated as valedictorian, studied law, was admitted to the bar, and opened his own law office. In 1847, he became ill with tuberculosis, and his doctors recommended a change in scenery. Hayes thought that enlisting in the Mexican-American War might be the change he needed. However, Hayes’s doctor said that wasn’t exactly what he’d had in mind, so Hayes and his uncle Sardis journeyed to Texas. Business was slow there, so they returned to Connecticut. Eventually, he went back to Ohio, where he opened another law office with established partners and met his future wife Lucy. Lucy never drank and believed in abolition; her views would strongly impact her husband’s politics.

Though his first cases dealt mainly with commercial matters, Hayes tackled criminal law and found success there. He was resourceful as he worked to defend accused murderers; in one case, he helped a woman plead insanity to avoid the gallows and instead be placed in a mental institution. Hayes also heard the cases of escaped slaves, which he found both personally gratifying—as he was becoming a staunch abolitionist—and politically handy. Defending slaves helped him be noticed in the newly formed, anti-slavery Republican Party, and he became a city solicitor.

These early experiences helped mold Hayes for his future role as President and following are some business lessons we can learn from him.

Sometimes you’ll have several potential uses for your valuable time. You can’t do it all at once, and sometimes you need to decide what is most important. Rutherford B. Hayes was in the middle of a successful career in the military when he was nominated to Congress. He felt his duty was to fight the war, however, and he stayed in the army. He still campaigned via letters, and he won. He managed his time, prioritized, and still accomplished two important tasks.

Hayes was an idealist. He saw many things wrong with the country after the war, and he strove to fix what he could see. He worked to end racism in the South, the spoils system, and sectional strife. He wasn’t successful in all of these endeavors, but at least he tried. When you see something wrong in your business, you should probably see what it would take to fix it. Problems are rarely solved by themselves.