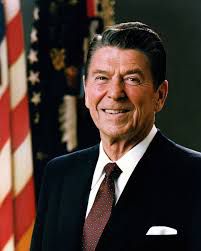 Ronald Wilson Reagan was born, on 6 February 1911, to Nelle and John Reagan in Tampico, Illinois. With his older brother Neil, Ronnie and his family moved around Illinois, as John looked for sales work, until 1920 when they settled in Dixon, which Ronnie always considered his home town. John Reagan had a high-school education and was a gifted salesman. Unfortunately he was also an alcoholic. He died in 1941, leaving nothing for his family. Nelle nurtured her sons and gave freely to charity, though she had little for her children. Ronald always remembered his mother’s compassion and generosity and spoke of her fondly. She died in 1962.

In 1928 Reagan graduated from Dixon High School where he’d shown an interest in dramatics, drawing and journalism. By this time he was widely known by his boyhood nickname of “Dutch.” Although no member of the Reagan family had better than a high school education Dutch Reagan enrolled at Eureka College near Peoria, Illinois. He took dishwashing and other jobs to pay for his education, making enough to send money home, finally inducing his brother, Neil, to enroll at Eureka also. Ronald was a nearly solid “C”-average student, majoring in economics but he threw himself into extracurricular activities including dramatics and football.

After graduation Reagan found a job as a radio announcer first in Davenport, Iowa then in Des Moines. He struggled at first but eventually became one of the Midwest’s best known sports announcers. He became popular as a speaker before Des Moines service groups, and enlisted in the US Cavalry so he could ride horses. Dreaming of doing bigger things he went to California with the Chicago Cubs baseball team for spring training. While there he arranged for a screen test at Warner Brothers who offered Reagan a contract for $200 a week, thus launching his film career.

Ronald Reagan made fifty-two films over the next twenty years: starting with Love Is in the Air in 1937 and ending with Hellcats of the Navy in 1957. He started his career in the B-movie division of Warner Brothers. Reagan once remarked of this period: “they didn’t want [the films] good, they wanted them Thursday.” His big break came when he won the role of George Gipp in Knute Rockne – All American (1940); playing the role of a doomed Notre Dame football star who died at the age of 25 of a streptococcal throat infection, days after leading Notre Dame to a win over Northwestern University in his senior season. Could it have been the fact that, with all those movies under his belt, Reagan was never nominated for an Oscar which led him to turn his eyes towards politics?

He’d always admired President Franklin D. Roosevelt and his “New Deal for the American people” program. Reagan’s father and brother had both benefited from the plan, finding jobs during the height of the Great Depression. Reagan was elected President of the Screen Actors Guild where he became embroiled in issues concerning communism in the film industry. During this time his political views shifted from liberal to conservative. His parents had been Democrats, a view that Reagan followed until he was fifty years old. He never lost his admiration for FDR though he switched to the Republican point of view in 1962.

Reagan’s change in attitude was caused by his increased wealth, and the taxes that go hand-in-hand with income; conflicts with the leftist union leaders during his tenure in SAG; and exposure to the views of a nation that believed that the workings of the New Deal were stifling growth and individual freedoms. Reagan made his views known in a speech he gave on 27 October 1964, endorsing Republican candidate Senator Barry Goldwater. He used the stories and statistics that became the staples of his General Electric speech. The speech he used when he became a spokesman for that company, and hosted the televised program General Electric Theater from 1953 to 1962. Reagan’s words dealing with what he saw as the US weakness in the face of the growth of the Soviet Union helped to raise one million dollars for Goldwater’s campaign. Though the Senator lost the election, conservatives had heard Reagan’s words and knew that they had found a new standard-bearer.

Ronald Reagan’s run for the Governorship of California, in 1966, was supported by wealthy Southern Californian entrepreneurs and by his wife, Nancy. He defeated a moderate Republican in the primaries, and then went on to win over two-term incumbent Democrat Edmund G. (Pat) Brown. In 1970 Reagan was elected to a second term. Having a movie and television star as a governor seemed strange to everyone, except the Californians.

Governor Reagan proved to be much more pragmatic than anyone had anticipated. He quickly agreed to raise taxes in order to solve an inherited budget deficit. He also restored peace on California’s university and college campuses; worked alongside the Democrats to achieve welfare reform and property tax relief; and to protect the rivers along the northern coast of California. On the downside, Reagan failed to reform the state mental hospitals and created an ill-fated initiative that would have imposed a state and local government spending cap.

It seems fine, now, but a movie star for president? Seriously? Strange things come out of California. I believe that’s why we don’t give it back to Mexico. On the other hand, the unexpected can be a business’ biggest success. If done tastefully a surprise around every corner can be the key to repeat customers.

It was his charm and political savvy that worked for Ronald Reagan. Although he never won an Oscar for his movie performances, his ability to read the script kept him in office. Even the best performer is going to have some writer run up to him, just before the next shoot, with a new page of dialog. The customer is not always right but, in business, that customer still needs to be listened to. If there is a problem, it should be addressed. Diplomacy is usually the best course of action. “I don’t know, but I’ll find out” will at least remove the lit fuse from the stick of dynamite. Then follow through. Sam Walton, owner of Sam’s Club and Wal-Mart instructs his Associates to never let the sun set on a problem. It certainly seemed to be a workable idea.

President Reagan was sixty-nine days into his term when he was shot by a would-be assassin. Yet it was term limitations that moved him out of office. There are reasons for everything that happens in business. Find those reasons, study them, use or discard them. Do not turn them into excuses.

Alzheimer’s is a terrible disease, robbing patient and family alike. Yet the Reagans chose to make the President’s condition known. Sharing the business problems with the workers and clients can go a long way toward understanding. Even the rural business owner saw the wisdom of this. Ever seen a “gone fishing” sign? It may be an inconvenience but it IS knowledge. And you know what they say about knowledge. Be open, be honest, and be successful.