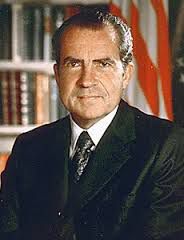 Richard Milhous Nixon was born 9 January 1913 in Yorba Linda, California, a far western suburb of Los Angeles. He grew up in Whittier, California; an equally small town north of Yorba Linda. Richard’s parents, Frank and Hanna Nixon had five sons. Richard was the second in line. His family was working class: his father ran a grocery store and gas station. The elder Nixons were not happy with their circumstances and passed on to their son a strong sense of ambition as well as a feel for both sides of the personality coin: father Frank was an argumentative man while Mother Hanna was sweet-tempered. While still a young man Richard suffered the deaths of two of his brothers: Arthur, a younger sibling who died after a short illness and Harold, the eldest, after a protracted one.

Richard did well in school: winning debates and elections and being chosen as the lead in dramatic roles. Yet, while his grades were excellent at both Whittier College (graduated in 1934) and Duke University’s law school (class of 1937) – from which he graduated near the top of his class – his overall academic achievements were not stellar enough to get him a job with the Federal Bureau of Investigation nor with several prestigious law firms. His first job was as an attorney in Whittier. He also served on the Whittier College Board of Trustees and worked as an actor with the Whittier Community Players where he met and fell in love with Thelma Catherine “Pat” Ryan whom he married in 1940.

Richard and Pat returned to the east coast when he landed a job with the Office of Price Administration in Washington, D.C. After the bombing of Pearl Harbor Richard enlisted in the Navy, as an operations officer, and served until the war ended in 1945. During his period of service he won large amounts of money playing poker. He used his winnings to help fund his first political campaign in 1946. It was the start of his political career and resulted in his defeating a five-term Democratic congressman.

Historian Garry Wills coined the phrase “The Denigrative Method” of political campaigning. The term has since become known as “negative campaigning.” Whatever phrase is used, Richard Nixon was a master. The practice was straightforward enough – Richard simply attacked his opponents. He set the pattern with his very first campaign – maligning New Dealer Jerry Voorhis, from the 12th Congressional District of California. Voorhis refused to accept the endorsement of any political action committee that didn’t agree with his anticommunist stand and renounce any communist interests within their ranks. His insistence denied him the support of the Congress of Industrial Organizations – a communist infiltrated group. Nixon’s campaign manager stated that he had proof that Voorhis did accept the CIO PAC endorsement. The group whose bulletin Nixon produced during a debate was the National Citizens Political Action Committee. Voorhis pointed out the difference but Nixon had linked the two organizations together in the mind of the voters. This tactic allowed Nixon to defeat Voorhis in the November election.

The next step was Richard’s appointment to the House Un-American Activities Committee. While a committee member Richard participated in the investigation of Alger Hiss who was eventually found to have passed information to the Soviet government. Alger Hiss had been a prominent employee in the US State Department. Richard’s reputation was elevated by the case and, in 1950, he ran for the Senate against Helen Gahagan Douglas. His Denigrative Method tactic this time around was to include a pink sheet in his campaign manual which compared Helen Douglas’ voting record to that of Communist Party-liner Vito Marcantonio. Richard won the seat and was dubbed “Tricky Dick” – a sobriquet that he carried for the rest of his life.

Richard Nixon was 39 years old in 1952, a Senator from California, when General Dwight David Eisenhower selected him as his Presidential running mate. The nomination had nation-wide repercussions as the New York Post newspaper ran the headlines: “SECRET RICH MEN’S TRUST FUND KEEPS NIXON IN STYLE FAR BEYOND HIS SALARY.” Nixon averred that the slander came from the Communists that he’d been investigating. In fact the story came from the California Republicans who were disgruntled over the fact that Nixon was Eisenhower’s running mate and had not thrown his support behind California’s favored son, Governor Earl Warren. The fund may have been unseemly but it was not illegal. The money was used to keep Nixon on the campaign trail and he won a positive public response when he made a speech, on national television, defending the finances. The high point of the speech was the reference to a promise he’d made to his eldest daughter to not return the only campaign gift he’d ever accepted – a Cocker Spaniel puppy named Checkers. Tricky Dick’s star rose again. He followed Eisenhower to victory in a landslide.

President Nixon did not win every political race he entered, but he did win the greatest of them all. His greatest failure in the face of Watergate was that he lied and that’s what the people wouldn’t forgive. He excelled in the field of foreign relations. He got out there and met with the other world leaders, face to face, to resolve differences and reach accord. Let’s see how all of this relates to the business world.

All business, as with any life form, must begin somewhere. The desire to succeed should be paramount, a wish to improve. With the right goals, the right education and, very often, the right friends, even the smallest business can be successful. A constant and honest assessment of gains and losses not only keep a business on track but, like mid-term and final exams, offer a picture of progress.

Not every step is going to be an easy one. The businesses that do well are the ones that learn from their mistakes and failures. What, exactly, did we do wrong? Very often the answer is “nothing” – it was just one of those wrong place/wrong time things. With a solid foundation and a good and useful product every business has a chance to survive if it just keeps going.

Honesty and integrity are the core of any business procedure, at least it should be. Whether one is cutting hair, building railroads, painting traffic markings or collecting garbage “any job worth doing is worth doing well.” Customers and clients will not return or continue to support a business if they feel that they are being cheated. And no business survives without someone to do business for. Mistakes will happen, it’s inevitable. Best business practice dictates that those mistakes should be acknowledged and rectified. He who keeps an eye solely on the bottom line will eventually have no bottom line to keep an eye on.

4) Work With Your Strengths

The ivory tower has been completed, congratulations. A good businessperson will leave that tower upon occasion to gain first-hand experience about how things are going. A very good example was the reality television program “Undercover Boss” where, each week, the owner of a company would “go down” among his employees and work side-by-side with them, learning the business from the ground up, again. It is widely known that something that isn’t broken doesn’t need to be fixed. How can that assessment be made unless the item is put to use? Do your employees know who you are? Do you know who they are? A successful business owner will be able to answer “yes” to both questions.