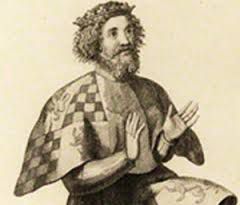 Richard FitzAlan belongs to the class of people whose birth date is in dispute. One source says “c. 1306”; the other says “not before 1307.” On second thought, 1307 IS circa 1306 so perhaps it is the month, rather than the year, that is unknown. What IS known is that he was the eldest son of Edmond FitzAlan, 9th Earl of Arundel (1 May 1285 – 17 November 1326), and Alice de Warenne (15 June 1287 – 23 May 1338). His maternal grandparents were William de Warenne and Joan de Vere. William de Warenne was the son of Alice de Lusignan, half-sister to the English king Henry III.

Edmond FitzAlan formed an alliance with Hugh le Despenser, 1st Earl of Winchester and a favorite of King Edward II. Richard was married to Isabel le Despenser on 9 February 1321. The alliance lasted five years: on 17 November 1326 Edmond FitzAlan was executed and his estates and titles confiscated. In 1330, after the fall of Mortimer, Richard petitioned to be reinstated. As a result of his efforts he was able to win back the greater part of Earl Edmond’s possessions. Richard was, however, forbidden to continue his efforts to avenge his father’s death; thus ending his private war with John Charlton, 1st Lord Charlton of Powys.

In 1331 John acquired the castle of Arundel from the heirs of Edmond, Earl of Kent. These grants were repeatedly confirmed. In 1334 Richard received Mortimer’s castle at Chirk and was make Justice of North Wales. His large estates in that region gave him considerable local influence. When the appointment was confirmed Richard became Justice for life. He was also made life-sheriff of Carnarvonshire and governor of Carnarvon Castle.

Richard FitzAlan was a very busy man. He had land and cash but apparently didn’t get to enjoy much of it until he was ready to retire. Traipsing about the countryside on horseback can be very hard on the backbone. One hopes that he had and utilized a carriage from time to time although that doesn’t guarantee comfort either. Richard had a job to do; he did it, and was rewarded handsomely for his efforts. Things haven’t changed much in 648 years: hard work can still be handsomely rewarded. For the businessperson who wants to build a successful workforce, rewarding hard work ought to be a priority. Anyone who is good enough for you will be good enough for the competition, as well.

2. Take Time For The Good Stuff

Another point to be made is to stop and take time for oneself. Although they aren’t mentioned it is to be assumed that Richard had a large retinue, yet he was the one who made the final decisions. No matter how many levels of intermediaries there are everyone ultimately looks to the guy on top for answers. There can be only one general on the battlefields and that general needs to recharge from time to time in order to remain alert and functional. Vacations, weekends, the occasional “just because” day off ought to be standard practice. Richard FitzAlan had ten years of retirement. There is no record of what he did with his time but I suspect that sleeping was on the top of the list. Richard had seven children so it is evident that he didn’t spend his entire life in the saddle. Family is important; it provides an anchor in an uncertain world and can provide that spark of motivation that might be required to get over the next hurtle.