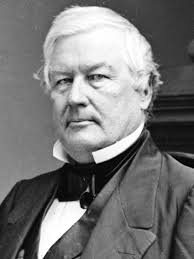 Millard Fillmore is a president that few have heard of. However, he did become president, an achievement of note in itself that deserves respect and admiration. The story of Millard Fillmore begins with his ancestor John Fillmore, a fisherman, whose sloop was boarded by pirates. John Fillmore was an able seaman, and the pirate captain conscripted him as a part of the pirate crew. Fillmore resisted, and the pirates unleashed their cruelty upon him. In the end, after several months as an unwilling pirate, he and two others rose against the pirates when they were all drunk, killed four of them, and brought the captured ship in Boston harbor. They pirates were all hung; the grateful Royal Navy gave and the gun, sword, gold rings, and silver shoe buckles of the pirate captain to Fillmore. John Fillmore left the pirate relics to his son, Nathaniel Fillmore. Nathaniel went into what was then untamed wilderness and made a home in present-day Vermont. He fought in the French and Indian War and in the Revolution, living till the end of the war of 1812.

In foreign affairs, Fillmore accomplished more than many people give him credit for. He was very active in regard to Asia and the Pacific, especially Japan. With help from Secretary of State Daniel Webster, Fillmore sent Commodore Matthew C. Perry to open Japan to Western trade, though Perry wouldn’t arrive in Japan till after Fillmore had left office. Fillmore also paid constant attention to Mexico to avoid a continuation of the war. He laid the groundwork for the Gadsden Treaty, which would add land to southern New Mexico Territory and finalize the modern borders of the United States during the next president’s administration. The Fillmore administration fixed a serious disagreement with Portugal left over from the Taylor administration and resolved a disagreement with Peru.

Here are some business lessons we can learn from Millard Fillmore.

Millard Fillmore may be remembered as one of the more humble presidents. He was not afraid to let others take the credit, even when he had done most of the work. This led many to regard him as a true gentleman.

Humility is a good way to impress people. Besides, nobody likes someone who feels insecure and needs to be recognized for every achievement. It may be a true sign of ability when you feel confident enough to let your accomplishments go unsung.

2. Anger Doesn’t Get Anything Done

Fillmore knew he wasn’t going to rank among America’s favorite presidents, and when a servant joked that he was a “secondhand president,” Fillmore just laughed at the joke. He could have gotten very angry at the servant; he was the president, after all, and he deserved some respect. But he didn’t. Anger will never serve you in life or in business, and everyone would do well to remember that.

Fillmore developed a reputation as a polite, well-mannered young man; this impressed a local lawyer enough for the lawyer to help him along on his education. Being polite, like being humble, is an excellent way to display confidence with your own abilities; it can also convey the respect with which you hold others.

It probably isn’t necessary to describe how important it is for a businessperson to avoid excessive debt. Certainly some debt may be required, especially when starting a business, but you should be sure to pay back your debts as soon as possible. In doing so you would follow the example of Millard Fillmore, who owed his cloth maker master a debt after he terminated his apprenticeship early. Fillmore paid back the debt as soon as he could.