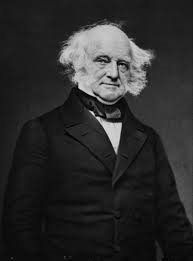 Marrtin Van Buren had his first exposure to politics when he attended a convention for the Democratic-Republican Party and helped a local politician to be elected to Congress. He found he rather liked politics. But we can also learn a few things about business from him.

You will doubtless receive bad news from time to time in your business career. What good is achieved by making a scene or by wallowing in self-pity? The only thing you can do is bravely taking the news and immediately making plans to overcome any new obstacles. Martin Van Buren received the news that Congress had rejected his appointment as minister in front of hundreds of onlookers and took the news without throwing a fuss. Many of those present were inspired by his reaction.

As a young man, Van Buren went up against a much older lawyer and so impressed everyone in the room with his legal knowledge and speaking skills that he won the case. He refused to be intimidated by the more experienced lawyer. While you should make sure to show respect where it is owed, you shouldn’t allow yourself to be intimidated. You may even impress the right people with your confidence and find yourself to further opportunities.

Organization is crucial to any business, as Martin Van Buren knew. He kept the political machine of New York running smoothly and efficiently, and many political careers were furthered because of Van Buren’s hard work. His skills were so impressive that people nicknamed him “the Little Magician.”

Organization is everything in business: it helps efficiency, encourages growth, minimizes losses, and maximizes gains. By running your company at its peak organization level, you can see to it that your company achieves its potential.

Even after suffering an ignominious defeat when running for a second term, Van Buren didn’t harbor anger toward his opponents. He treated them with respect. When he visited heads of state after his presidency was over, people received him graciously because they knew him to be a civil man. Your rivals in business may thank you if you follow Van Buren’s example; and even if they don’t show their gratitude to you, you’ll know you’ve taken the high road.

5. Know when it’s Someone Else’s Turn to Lead

When Van Buren lost, he was grateful that it was someone else’s turn to have the difficult job of leading the country. He even said that leaving the office of the president was one of the happiest days of his life. Eventually, the time will come for you to step down and let others run your company in your place. You should allow for the transition of power in a respectful, helpful manner and do what is best for your company.