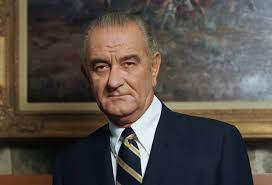 Lyndon Baines Johnson was born in Texas, 27 August 1908, to Sam Ealy Johnson, Jr. and Rebekah Johnson nee Baines. He was the first of their five children, big brother to Rebekah, Josefa, Sam Houston and Lucia. The Johnson family ancestors had been among the earliest settlers of what would one day become the Lone Star State. They were cattlemen, cotton farmers and soldiers in the War Between the States – fighting on the side of the Confederacy. Lyndon’s family home was in a small farmhouse, situated on the Pedernales River not far from Johnson City, which had been named for the original settlers. His family did not prosper as his father was not cut out to be a farmer. The elder Johnson spent his days dreaming and talking, a pastime which resulted in his being elected to five terms in the Texas legislature.

The Johnson home was comfortable by the rural standards of the time although it was without electricity and indoor plumbing. The early school years began in a one-room schoolhouse and progressed through Johnson City High School which was three miles away and reached on mule-back. By the age of twelve Lyndon knew that he wanted more. He wanted to be President of the United States which he felt would give him the power to change a system that allowed cotton prices to drop so low that it robbed whole families of their homes and livelihoods. Lyndon graduated from high school, top in his class, in 1924, at the age of fifteen. It was an admirable feat but not a difficult one as there were only six seniors in the graduating class.

Although his parents had worked hard to send Lyndon to Southwest State Teachers College (now Texas State University, San Marcos) to augment his rural education, once he’d graduated from Johnson City, Lyndon decided that he was done with school. He bought a car, packed up five of his closest friends and headed west to California. F

He was still an indifferent student but his extracurricular activities included journalism, student government, and debating. He earned money by working as a janitor and as an office clerk. His student teaching assignment was at Welhausen School, Cotulla Texas. He taught fifth, sixth and seventh grade at the tiny Hispanic school whose students knew nothing but abject poverty. Lyndon took over, pushing the students to excellence and instilling hope for their futures and pride in their accomplishments. At the same time Lyndon edited the Teachers College paper and starred on the debating team. When he graduated on 19 August 1930, he had earned glowing references. He taught at Pearsall High School, in Pearsall Texas then accepted a job at Sam Houston High School in Houston where he taught public speaking. In 1931 his debate team won the district championship.

Lyndon’s activities while in college drew the attention of those around him. He worked tirelessly in the local campaigns of a family friend. In 1931Congressman Richard Kleberg, newly elected to the US House of Representatives, tagged Lyndon to join him, in Washington, as the Congressman’s secretary. It was a position that Lyndon held for more than three years and it gave the young man an opportunity to learn how the Congress worked. His skill, work ethic and dedication resulted in Lyndon being elected as speaker of the “Little Congress” which was an organization of interns and Congressional secretaries.

Lyndon attended the fall semester at Georgetown University Law School in 1934. It was a brief stay. During a trip home Lyndon met Claudia Alta Taylor. He knew, instantly that he’d met his future wife. It took two months for the woman who became known to the world as Lady Bird Johnson to agree to his proposal. They were married 17 November 1934 and honeymooned in Mexico.

Lyndon Johnson was not the best student, but he excelled at the things he wanted to do. In business it is necessary to recognize the talents of those around you and match those talents to the jobs at hand. Education is an important tool but a PhD may not be useful when the plumbing goes out.

Growing up on a poor farm and teaching at an impoverished school instilled an ethic in young Lyndon which drove him to better himself and those around him. Being at the top of your game is only useful if you use your skills to help others. The commonly known quotation is “It’s lonely at the top”; but it doesn’t have to be. Without a firm foundation the top isn’t going to last very long.

LBJ finished high school and eventually went on to graduate from college but the events weren’t linear. A successful business will realize that its people may be stretching themselves, testing the waters for ideas and goals that they’d never considered previously. Allowing this growth will afford the savvy businessperson a wealth of talent and success that is not be possible when the worker bees are confined to a single field of flowers.

The episode of the two bomber planes points out the concept of “things that are meant to be.” Obviously LBJ made the correct choice, whether by accident or not. This works in business, also: when all is going well, pay attention to what is being accomplished and stay away from the “too good to be true” attitude. A good work ethic, a fair treatment of subordinates, co-workers and clients is a blueprint for success. If it doesn’t feel right then it probably shouldn’t be done.

LBJ decided, at age fourteen, that he was going to be President of the United States. Looking over the events of his life there are points where that goal might have seemed unattainable. While not all goals are attainable the reason for their being out of reach might be minuscule. If LBJ had not been born an American becoming President would have been an unreasonable idea. If your company makes socks it might not show sound business practice to attempt to make transistors; unless, of course, you are willing to spend an enormous amount of money to retrain yourself and your employees. Most banks will not make loans to new companies whose principals don’t have a sound business plan, a roadmap to where the business is headed. Once the map is finalized, use it. Stay the course.

LBJ understood that he was finished. He had accomplished a great many things in his career: not all of them were popular. There were other things he wanted to do so he stepped down. This is probably the most difficult decision that a leader has to make: when to step aside and let someone else run things. The choice is easier to make if there is a plan: what to do with the rest of the time one has?