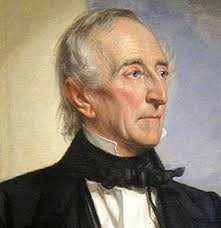 An odd twist of fate, previously unknown in United States history, made John Tyler president, and for that he will be remembered. However, in many ways, he was very similar to previous presidents. Born in Virginia to an aristocratic planter family, Tyler’s father was an old patriot who had served in the Continental Congress.

After graduating from college at the age of seventeen, Tyler studied hard and passed the bar at only 19. He was too young to legally pass the test, but the clerk on duty was negligent and failed to ask Tyler his age. Tyler’s father, John Tyler Sr., became the governor of Virginia at about the same time that his son started up a law practice in Richmond. After two years, Tyler joined the Virginia House of Assembly, where he became known as a supporter of states’ rights, a position that would prove important in his life later. He also possessed a keen sense of nationalism and considered it important for the Americans to distance themselves from their British heritage.

In 1840, Tyler ran with William Henry Harrison on the Whig presidential ticket. They appealed to Southerners, who often thought of themselves as Southerners instead of Americans and who valued states’ individual identities. “Tippecanoe and Tyler Too” won the election. And then, a month after being sworn in as vice president, Tyler was visiting his country home when a rider galloped in and brought him the following letter: “It becomes our painful duty to inform you that William Henry Harrison, late President of the United States, has departed this life.” Tyler hurried to Washington to take the oath of office. Tyler’s opponents called him “His Accidency” and a constitutional crisis began. The Constitution specified that the vice president was to take over as president if the president could no longer serve, but it was unclear whether that meant the new president was only acting or actually serving with the full powers of the office. Some of the members of Harrison’s cabinet were concerned that Tyler would deviate from their Whig ideas. These cabinet members wanted Tyler to serve only in the interim while they selected the new president, but Tyler made it clear that he was now president in every sense of the word, there to stay until the next election. In one of his first cabinet meetings as president, Tyler was informed that Harrison had established a system where the president had one vote and each of the cabinet members had a vote, and decisions were made according the combined voice of the council. Tyler respectfully told them he wanted to hear their counsel, but he was President of the United States and was solely responsible for the decisions of the office. If they did not like that, he told them, they could resign. Impressed by his initiative, both houses of Congress declared Tyler the tenth President of the United States.

Here are a couple of business lessons we can learn from John Tyler.

Tyler’s cabinet expected him to bow to their wishes, but Tyler let them know early on that he, as the new President of the United States, would be in charge. He would not let them bully him. As you face intimidation from rivals and peers, you can follow Tyler’s example. You can also show strong leadership when leadership is needed.

John Tyler neither wanted nor declined the presidency. He simply accepted what was asked of him and did his best to fulfill his responsibilities. Wherever you find yourself—at the forefront of the company or somewhere near the bottom of the chain—you should do what is asked of you and see what opportunities follow.