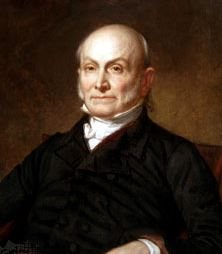 Our sixth President had to overcome various difficulties to achieve success and we can learn from these.

1. Let Others’ Strengths Complement Your Weaknesses

John Quincy Adams was never much of a people person. His social skills left much to be desired. This could have been a great hindrance to his career, but his wife Louisa was warm and personable, which complemented her husband’s weaknesses. Together they made a fine team. No one is great in every area; it’s likely that you have many weaknesses of your own. One way to prevent those weaknesses from destroying your business is to work with people whose talents make up for the areas in which you lack.

By age ten, Adams was already traveling with his father on diplomatic missions. While not everyone may have such fortunate opportunities to start their careers so early, you should never allow yourself to think, “I don’t have to learn yet. I have plenty of time.” Those who succeed never miss a chance to accumulate experience and knowledge.

Adams resisted for years the call of a diplomatic career. He wanted to live a quiet life in Massachusetts and raise his family, but his skills were too great to be wasted. He could not ignore the potential to make a difference in the world. When he was appointed ambassador to five countries, he accepted the jobs and eventually realized that the world was better off when he contributed to it.

You no doubt have skills and talents that others do not have. If you had riches, would you bury them and never spend them? Of course not. Then why would you fail to use your abilities?

4. Get Up After You Fall

Adams faced some humiliating political defeats. Because of party tensions, his career in the Massachusetts legislature came to an early end. After serving only one term as president, Adams lost the next election when his political enemies worked against him. However, in both instances, he continued on. After his removal from the Massachusetts legislature, Adams became ambassador, secretary of state, and president. After he lost the presidency, he won a seat in the House of Representatives and was elected to eight terms.

This book has already stressed that occasional failure is a part of business. Get up! Keep going! Keep working for your goals!

5. Fight For Your Convictions

In a time when many still believed heartily in slavery and slavery’s economic value, Adams thought the institution was vile and wrong. When he served in the House of Representatives, he was one of the most ardent abolitionists in Congress. He fought against the gag rule, which prohibited Congress from hearing slavery-related bills and defended slaves who attempted to regain their freedom. This made him unpopular with many, especially Southerners, but Adams held onto his convictions.

In the world of business, you will have many chances to abandon your ideals and conform to lesser standards. Do not give in. When you believe something is right, you should never let pressure from others deter you.