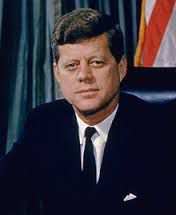 John F. Kennedy was born in 1917 to a wealthy family, the second of nine children. Both of his grandfathers had been active in politics, and had been labeled by those who remembered them as disreputable. As a result, John's parents experienced prejudice among their peers, despite their wealth. Their social status was also marred as the family was of Irish descent, which was looked down upon by many who were considered upper class.

Joseph and Rose Kennedy, John's parents, decided to make their children their "best friends" and chose not to go to many dinners and bridge parties with others of their acquaintance. They eventually were able to afford a staff including a governess and nurse. Although there was no lack of love in the home, Joseph was often away, and Rose never actually told the children she loved them. To her, their relationship was one of mutual respect. She paid close attention to the advice of the child rearing experts of the time.

Rose was very attentive to her children, making sure all of them had straight teeth and high morals. She took frequent trips to an orthodontist in another town, and they attended church every day. John was the most rebellious child of the family, often refusing to act as his mother commanded in religious matters. She was a very devout Catholic, and as they grew, most of her children were praised for their accomplishments in the church. Joseph made sure they were educated in history and politics.

Joseph Kennedy raised his children to seek careers in public service. He said he believed there were already enough businessmen in the world, and it was more important that good, informed men could handle the affairs of the country and its relations with other nations.

In 1930, John entered a Catholic boarding school in Connecticut, where he excelled at sports, an accomplishment that was overshadowed as he was often ill. He left the school in 1931, after a case of appendicitis, and the ensuing appendectomy meant he needed to go home for a while. He never returned. Instead, the next year he began attending Choate, the boarding school that his brother, Joe Jr., had been enrolled in. Although he tested high on IQ tests, John's grades were less than stellar. His teachers often criticized his lack of dedication to the subjects, and his tendency to arrive to class unprepared.

Throughout his school years, John continued to suffer from multiple ailments, and was eventually sent to the Mayo Clinic to discover the cause of a particularly distressing condition. In the end, a doctor concluded that he was affected by various allergies. He was later diagnosed with Addison's disease, a disorder of the adrenal glands; however the doctor who treated the disease ruled out any connection between it and his earlier problems. Being from a wealthy family, it was 1936 before Kennedy ever earned any money. He and his brother, Joe, were sent to work at a cattle ranch to spend the summer doing manual labor. They worked six long days a week, and made a dollar a day building adobe buildings.

Despite his poor health throughout high school, Kennedy still managed to get good enough marks, and show enough promise to be accepted to Harvard. In 1939, Kennedy took a leave of absence from Harvard to work at the London embassy, where his father was stationed as Ambassador. He spent that spring and summer traveling and reporting political situations to his father. He met dignitaries and politicians, while making a point to talk to everyone he met, including reporters, and people on the street. As a result, his information went beyond what could be learned from officials in public offices.

After Germany attacked a British passenger liner, killing one hundred twenty-eight passengers, Kennedy was sent to help the American survivors get back home. Many of them were angry and frightened, and they demanded a naval convoy to escort them back to America. Kennedy could not secure a convoy, because the President had already made a statement that no naval resources would be used to repatriate Americans. Kennedy proved his skill at handling tricky situations and got all of the survivors back to the United States before returning to Harvard. He also made sure his father arranged for an official thank you to be sent to the men that rescued them.

As the United States came closer to entering World War II, Kennedy decided he wanted to enlist in military service. Due to his poor medical history, he could not pass the physical exams, so he had to ask his father to pull some strings. In 1941, John Kennedy enlisted in the Navy as an intelligence officer.

This was not a challenge for JFK – being Irish Catholic it was almost expected, although it is often a challenge to the average man or woman. The term “rebel” has a negative connotation in the mind of most people yet it is the rebels who have moved the business world along. Multi-million dollar companies that began in a garage or a basement have become common-place but they were not the norm during the Kennedy Administration.

JFK developed an ability that became a beacon to all Americans. He learned how to speed read which allowed him to read the major daily newspapers, every day. A successful businessperson will take every opportunity to learn all they can about the business they are in as well as the supporting businesses that are vital to their own success.

During the incident with PT 109 the uppermost thought in JFKs mind was the safety of his men. A definition of fearless is to be oblivious of dangers or perils or calmly resolute in facing them. It is necessary to understand that business does not always run smoothly and that a plan will not always be acceptable to everyone. A fearless attitude moves forward despite the obstacles and, often, in the face of seeming hopelessness.

JFK would never have been President if he had allowed himself to dwell on all the situations that surrounded him with a negative light. A good business idea bolstered by a good business plan is a steady foundation. Some things work, some things don’t. Success is measured by working with the workable and discarding the unworkable. In truth, there are no limitations only lack of imagination and planning.

5) Strive Toward The Goal

The battle cry of the Fourth Estate during JFKs presidential campaign was “An Irish-Catholic President? NEVER!” History clearly shows how wrong THAT idea was. Although there was enough money to buy his way to the top, JFK always took the time to get out and learn what the people thought and wanted. Any business that seeks to be successful needs to remember their goal. Listen to what others have to say but only be influenced by what will assist in the achievement of the goal. It is impossible to please all of the people all of the time but if you please those who would be your clients and customers then you will, eventually, reach the goal.

6) Be Positive in Adverse Situations

As previously mentioned, the business road never runs straight or smoothly. There are always potholes, detours and speed bumps. A successful business will match the individual to the situation at hand. Trying to get an elephant to climb a tree will meet with little success. As will trying to get a monkey to carry a teak log. However, switch the roles and what was seemingly insurmountable becomes commonplace. Adverse situations are like limitations: they vanish in the face of skillful planning and the proper placement of personnel.