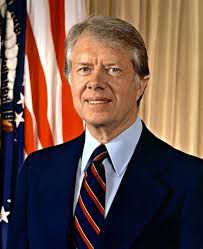 James Earl Carter was born 1 October 1924 in Plains, Georgia. The Carter family had lived in America since the 1630s moving to Georgia just after the American Revolution. Earl and Lillian Carter owned a peanut farm and warehouse and a store outside Plains. Earl was smart, hardworking and a very good business man. Lillian was a trained nurse who gave up her career when she discovered that she was pregnant, shortly after her marriage. The Carters had four children: James Earl was the oldest. His siblings were: Gloria, Ruth and William. Mother Lillian was well read and curious about her world and she crossed the strict lines of segregation by counseling poor black women in matters of health care.

Jimmy Carter was born in a hospital, the first American President to do so. Although his parents were moderately prosperous the Carter home had no electricity or indoor plumbing. He was ten years old when he took a wagon-load of produce from the family farm into Plains. He sold the lot. At the age of 13 he used the money he had saved to buy five homes around Plains. The buildings were available at rock-bottom prices due to the Great Depression. Jimmy rented them to families in the area to the delight of his father who was proud of Jimmy’s prowess.

Lillian’s brother, Tom Gordy, had joined the Navy and was diligent about sending home postcards from his travels around the world. Jimmy was fascinated with all the exotic locales and he told his parents that, someday, he’d join the Navy. Jimmy wrote to the US Naval Academy in Annapolis, Maryland before he entered high school. He graduated as class valedictorian in 1941. His plans to enter Annapolis were put off by the events of World War II when competition for admission was stiff. Jimmy spent 1942 studying Georgia Institute of Technology, pouring himself into his coursework. He was admitted to Annapolis in 1943 and graduated in the top ten percent of his class in 1946, just after the war ended.

The south was in an uproar in 1954. The Supreme Court had declared segregated schools to be unconstitutional. Rosa Parks, a black woman, had refused to give her seat on a bus to a white man. Blacks on the whole held boycotts and took a stand against oppression. The White Citizens Council was formed to maintain the status quo and the organization spread across the region, including Plains. In 1958 Jimmy Carter became the only white man in Plains who refused to join. The Council called for a boycott of Carter’s business but he remained steadfast and the boycott fizzled out. By 1959 his hard work and effective management had saved the farm and it began to prosper.

Jimmy became more involved with his local community’s activities. His first run for office was successful when in 1955 he ran for a seat on Sumter County Board of Education, eventually becoming its president. A new seat opened up in the Georgia State Senate due to a federally ordered reapportionment. Carter entered the race in 1962, was defeated in the primary and was then able to prove that the winner had committed widespread voter fraud. Carter won the appeal and the election. Carter earned a reputation as an independent operator during his first two terms as Senator. He attacked wasteful government practices, and helped repeal laws that had been enacted to discourage blacks from voting. When a vote was called at the Plains Baptist Church to decide whether to admit black worshippers there was an almost unanimous vote for continued segregation. Two of the three dissenting votes came from Jimmy and Rosalynn Carter.

In 1966 Carter gave up a plan to run for the US Congress and instead chose to challenge the Republican, Lester Maddox, for the governorship of Georgia. The idea was not a good one as the civil rights movement had broken the Democratic stranglehold on the South. As a Liberal Democrat, Carter didn’t stand a chance. He campaigned hard but came in a poor third in the Democratic Primary. Lester Maddox flaunted his refusal to allow blacks to enter his restaurant and distributed ax handles to his white patrons “for protection” and to show his disdain for the Civil Rights Act of 1964.

Carter was disappointed with his failure. He had built up substantial debt during the race. Even so, he worked hard to position himself for the 1970 gubernatorial election. He campaigned tirelessly and almost ceaselessly, covering the entire state of Georgia in the late ‘60’s. At this time the main tool of integration was to bus students. Carter wanted to end the practice but was certain that the only way to win was to capture the vote of the white segregationists, including Lester Maddox. The Atlanta Constitution, the leading newspaper refused to endorse Carter, describing him as an “ignorant, racist, backward, ultra-conservative, red-necked South Georgia peanut farmer.” The strategy made Carter governor of Georgia.

His critics called Jimmy Carter “the peanut farmer,” as if it was an insult. President Carter never hid his origins, always giving the appearance of being proud of where he came from. Some of our most successful businesses were started in garages or basements or were planned out in the dirt in the backyard. Unless a business is in business merely to exist sharing ones origins becomes a beacon for others to follow. Share origins, share success, prosper.

“Miss Lillian,” President Carter’s mother, was an intelligent woman who took the opportunity to learn about life around her. Captain Hyman Rickover was commander of a brand new concept: nuclear submarines. Jimmy Carter was mentored by two very strong people. No business, no matter how “cutting edge,” can exist in a vacuum. Take the time to learn the ins and outs. Fight the urge to take short-cuts, for valuable lessons might be bypassed along the way. Don’t read all the books, there are too many and nothing else will get done but learn what is relevant to the business at hand.

The Carter family as a whole was unique: a southern, white family that did what it could to help all those around it with no thought for the opinions of others. A good business must be open to all in its demographic sphere. Of course a gynecologist need not be prepared to work on men. At the core of things there are very few differences among people – a successful business will take those differences into account but will not make an issue out of them. “One size fits all” actually doesn’t.

Jimmy Carter has led a very active, useful, life since leaving office. He knew who he was and he returned to being himself. Library shelves are filled with books that contain stories about how this business head declined after retirement or that one voted himself a lesser role so that he could still “work.” It is wise to have a plan for afterwards. Then be as tenacious with that plan as with the one that got the business started and kept it going. Here’s another one: we don’t plan to grow old, we grow old because we fail to plan. Businesses succeed or fail for the same reason.