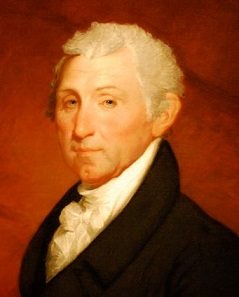 James Monroe was our fifth President and he did many things that businesses today can learn from as follows:

In battle and in political office Monroe showed great courage. He was wounded in battle while forcing the enemy retreat and was present at some of the important military events of the Revolutionary War. This courage served him later in office. Business may lack flying bullets or exploding cannonballs, but it is nevertheless a suitable place for you to show what you’re made of.

2. Don’t Stretch Yourself Too Thin

Monroe believed both men and countries had to find their priorities. They could succeed at a few things or fail at many things. He and John Quincy Adams created the Monroe Doctrine in part because of this philosophy, making sure America didn’t overexert itself by interfering in European affairs.

You will have many responsibilities and opportunities in business, and it is important to quickly decide where your priorities lie. Otherwise, you run the risk straining your mind, body, and resources and accomplishing nothing despite all of your efforts.

3. Get By with a Little Help from Your Friends

James Monroe dropped out of school to join the army, but when the war was over he had no schooling with which to find a career. Luckily, Thomas Jefferson took the young former soldier under his wing and trained him in law. Don’t be too proud to accept help where help is offered. You can take advantage of many opportunities by swallowing your pride and allowing people to do for you what you can’t do for yourself. When you find success, remember to help others like you were helped.

Monroe had little interest in law. He found the job tedious, unlike his former profession as a soldier. But he faced the challenge of finding a career in peacetime and knew he would have to do something he didn’t like.

You will probably have to do many things that you don’t enjoy in order to earn success. Work may mean long nights at the office or sacrificing the more enjoyable things now in order to secure a more comfortable or happy life later. Be prepared to make such sacrifices.

Monroe became president in the midst of the beginnings of the difficulties between North and South that would eventually lead to the Civil War. When Missouri’s admission to the Union threatened to destroy the delicate balance of power, Monroe oversaw the compromise that admitted Missouri as a slave state and Maine as a free state. He gave government jobs to people from both parties, keeping everyone happy enough to avoid further tension.

What sort of compromises will you have to make for the greater good? Sometimes the only way to move forward is to make deals with those who don’t share your goals and opinions. You may have to give up a little to gain what’s best for everyone.