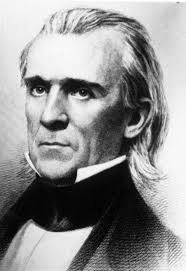 James K. Polk has been called the “least known consequential president” in United States history. He never had his faced carved in Mount Rushmore; nor is he on any American currency. He is not among the “favorite” presidents whose names children easily remember from school. However, Polk’s presidency was an important one during a pivotal time in US history.

James Knox Polk didn’t come into the world in the life of relative luxury that many of his predecessors enjoyed. He was born the first of ten children in a log home in what is now Pineville, North Carolina. As a teenager, Polk enrolled in college, learned the art of public speaking, and began to study law. He was soon elected clerk for the Tennessee State Senate, after which he passed the bar. His first case was to defend his own father from a public fighting charge. James Polk got his father Samuel off for a dollar fine.

In 1822, Polk joined the local militia and rose to the rank of colonel. His men called him “Napoleon of the Stump” for his impressive motivational speaking ability. When he became president, forty-nine-year-old James Polk was the youngest man to take the office. Expansion of the United States was one of his foremost priorities, and he aimed to bring in some or all of Oregon Territory to the US, acquire some or all of New Mexico and California, and let the former Republic of Texas become a state.

Here are some business lessons we can learn from James K. Polk.

Polk wasn’t afraid to think big. Some even believed he was thinking too big when he dreamed of gaining a large chunk of Mexico and the vast Oregon Territory for the United States. Despite the people who said he couldn’t do it, James K. Polk managed to gain much of what is today the western United States.

What can you do that people will say you won’t be able to achieve? How can you prove them wrong? Many of the greatest innovators and businessmen in history have proved wrong those who said they were thinking too big.

Many people also thought that Polk was too young to run for high office. Of course, he proved them wrong. If you’re already mature, don’t worry; you’ve got experience on your side. But if you’re young, don’t let that stop you.

In an age where dueling was commonplace, James K. Polk didn’t allow the outdated practice. He encouraged people to resolve their differences without bloodshed. This forward-thinking attitude resulted in people thinking of him as a gentleman. You’re likely to encounter many practices you find unethical or at least morally uncomfortable. Present yourself as a person of character and bearing by declining to participate in these activities, and encourage your business associates to do the same.

When Polk wanted Oregon Territory, he made a risky move in his negotiating with the British. He pressured the British to give the US the entire Oregon, which stretches far into present-day Canada all the way up to Alaska. The move could have backfired and led to further troubles with the British, but both sides were tired of war and agreed to compromise.

When you negotiate, don’t be afraid to take risks. You should, of course, weigh your options with care and take potential dangers into account, but playing it too safe can limit your options.

Polk promised to run for only a single term, and he kept that promise, despite the successes of his first term. Had he run for a second term, he might be remembered more widely among Americans. When people trust that you’ll keep your promises, they’re more likely to do business with you, and trustworthiness is the best way to go, regardless of the consequences.