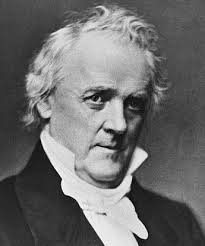 The son of Irish immigrants, James Buchanan was born in a log cabin in Franklin County, Pennsylvania. His father was a merchant and his mother could read and write; their modest means were enough to send young James to Dickinson College. Like Franklin Pierce, he was disciplined due to his poor performance and unruly behavior. Unlike Pierce, Buchanan was actually kicked out of school, but he petitioned for a second chance and came out on top of his class. Upon his graduation, Buchanan studied law and passed the bar.

In 1814, as the British were plundering Washington, the people of Lancaster, Pennsylvania, held a public meeting in response to the British invasion. Buchanan, a lawyer for only two years, delivered a fiery, patriotic speech encouraging the people to defend themselves. When he was finished, he volunteered in a company that the meeting had organized. The newly minted soldiers rode out to meet the British at Baltimore, but the British had moved on by the time they got there.

Despite the lack of action, Buchanan’s speech had won him minor fame, and he was soon elected to the Pennsylvania legislature. He made more speeches, gaining a reputation for eloquence, including a speech demanding that soldiers’ property be supported while they were away fighting in the war. His timing, once again, was a little late, and the war had just ended. However, again Buchanan’s prominence was growing. The Lancaster lawyer’s career in politics soared. From the Pennsylvania House of Representatives he went to the US Congress. At first a Federalist, Buchanan became a Democrat after the former party collapsed. He supported Andrew Jackson in the general’s 1824 bid for the presidency; Jackson, who tended to reward his friends, appointed Buchanan to be the minister to Russia in 1832. Soon Buchanan was on his way to the presidency. Here are some business lessons we can learn from him.

The hostilities at Fort Sumter, which led to the Civil War, could have been prevented or at least delayed had Buchanan had communicated properly with everyone involved. Instead, he failed to notify the Charleston commander of his plans, and the commander took matters into his own hands, which resulted in shots being fired. Without proper communication, businesses, like armies, can fall apart. Be sure that everyone in your organization knows what they should know, and implement streamlined communication methods to ensure efficiency.

Buchanan dreamed of a presidency like George Washington’s. Though in the end he came up short by the reckoning of historians, we should credit him for ambition. After all, how much can be accomplished when you set your sights on some easy goal? The most successful companies today exist because somebody tried to do something others thought was crazy.

As hard as it may be to accept this, you may not know best. Buchanan learned this lesson as the Civil War was looming, when he failed to heed the advice of General Winfield Scott, who told him to send troops to the South to protect Union interests there. We will never know how history may have been different had Buchanan heeded his general’s advice, but the fact remains that you should always at least consider the advice of those close to you.

4. Know When You’re Out of Your League

To his credit, James Buchanan recognized that with the Civil War breaking, he was out of his league. He didn’t run for a second term and handed over the presidency to Abraham Lincoln. It’s interesting to wonder how the Civil War may have played out had Buchanan run for and been elected to the presidency. Would the Confederate States of America still exist? We can only speculate. It is almost certain, however, that Lincoln proved better suited for the task of preserving the United States.

If you find a task that is too difficult for your abilities, you may face a choice: try it yourself or have the humility to allow for someone else to tackle the challenge. You may be an exceptionally talented individual, but you’re probably not the best at everything. Know when it’s time to take a backseat.

Rumors surrounding Buchanan led to the dissolution of his relationship with Anne Coleman. She died shortly after. Buchanan could have wallowed in self-despair and blamed others, but he reached out to Anne’s father to apologize for any part he may have played in Anne’s death.

In business, you may intentionally or inadvertently wrong someone. You should reach out as soon as possible so as to mend any broken personal or professional relationships.