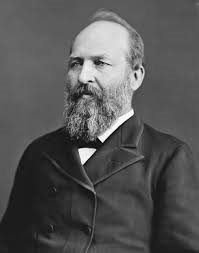 The sad story of James Garfield began in 1831, in a log cabin in Ohio, where Garfield was born to a poor family. His father died when he was only eight, and his mother raised her children alone. Garfield and his siblings raised cattle, hogs, and chickens, spinning and weaving the cloth for their clothes. Together their farm and house were worth about two to three hundred dollars.

Garfield wasn’t an ambitious man, but he wasn’t satisfied with his circumstances and sought to improve. Striving to rise above his humble life and inspired by books his mother read to him about the exciting life at sea, he got a job as a canal driver near Cleveland, but he soon fell ill. He went back home, and began to count himself lucky that illness had driven him away from the life of a seaman. Instead, he recognized the need for education in order to impel his life in the right direction.

Garfield took on odd jobs to support himself while he enrolled in school. He worked as a janitor, bell ringer, and carpenter. In 1849, he was offered a position as a teacher, which he hadn’t considered. He also took up preaching and earned up to a gold dollar for every sermon. He graduated from college with high honors and became known as a skilled debater. Garfield taught Latin and Greek, and during this time as a teacher he developed his political views, eventually declaring himself sympathetic to the moderate Republicans. He didn’t consider himself an abolitionist, although he did oppose slavery. He also met his wife while teaching; Lucretia Rudolph was one of Garfield’s star pupils. They later married and had seven children.

After growing weary of teaching, Garfield followed in the footsteps of so many future presents and studied law. At the same time, Republican Party leaders invited him to run for the state Senate, and he obliged. This foray into politics eventually landed him the Presidency. Here are a few businsess lessons we can learn from him.

1. You Don’t Have to Accept the Status Quo

James Garfield was born into a poor family, and through hard work he managed to escape the life of poverty he seemed destined for. Garfield’s admirable desire to change how things were can be replicated in business. Can you see any part of your career or company you don’t like? How can you change things? How can you improve things?

It’s a bit of a cliché, but clichés are often rooted in truth. Garfield recognized that knowledge is power; this recognition is reflected in his desire to gain education as a youth and his need to gather information as a soldier. In today’s technological world, information is more important than ever. Stay up to date with business trends and tools by assuring that you regularly take in new knowledge.

This lesson comes not from Garfield himself but from his assassin. While it is true that Guiteau certainly seems to have been mentally unhinged, his scheme to kill Garfield was neither logical nor well planned. The tragedy of Garfield’s death may have been prevented if Guiteau had been able to recognize the madness of his plan. Learn from Guiteau’s bad example by approaching your business ventures with careful thought.

4. Ambition is Good; Humility is Better

While he was an advocate of improving his lot in life, James Garfield believed in avoiding what he called “place-seeking,” or trying to obtain status. And yet, in spite or perhaps because of his humility, he rose to become president. How can you cut back on your ambition? You might be surprised at the results.