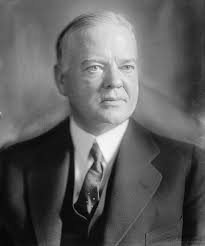 Herbert Hoover’s father, Jessie came from a long line of Quakers that believed in honesty, hard work and generosity. He was a blacksmith who sold his tools to operate a farm-equipment business. His wife, Hulda, was a teacher who bore her three children in a two-room cottage. As their circumstances became more prosperous, Jessie bought a larger house but two years after he became a salesman, he died and left his wife a widow. Herbert was six years old.

Herbert Clark Hoover was the middle child between two siblings, his older brother Theodore and his younger sister, Mary. Herbert had been born on August 10, 1874 in West Branch, Iowa, on the west side of the Mississippi River. With the money his mother collected from the insurance, she saved it for their education. But in 1884, three years after her husband died, she came down with pneumonia and typhoid fever and died also. The orphaned children were separated and sent to different relatives to live. Nine-year old Herbert ended up with his maternal uncle and aunt who lived nearby on a farm near West Branch.

When he was eleven-years-old, he was sent to Oregon to live with another maternal uncle who was a doctor. As he grew up, Herbert became shy, sensitive, and introverted. At school in Newberg, Oregon, he was an average student but had failing grades in some of his classes. In 1888, when Herbert was fourteen years old, the family moved to Salem where he worked in his uncle’s Oregon Land Company and developed an interest in that type of work.

When Stanford University in Palo Alto opened up in 1891, Herbert worked hard to pass the entrance exam, which he barely did. He majored in geology and opened himself up to get involved in many extracurricular activities. Without his mother’s money, he had to work his way through college but did so by getting employment as a clerk during the school year and an assistant on geology trips during the summers. He went to Arkansas, California, and Nevada.

After Herbert graduated from Stanford, he moved to California to work in a gold mine, pushing ore carts for seventy hours a week. His lucky break came when he was hired as an engineer to evaluate mines for purchase. In 1879, he went to work for a British company as Mining engineer in Australia and started making a lucrative income. His thoughts turned to Lou. They both loved the outdoors, had a sense of adventure, and she was on the verge of graduating with a degree in geology, the first female to do so at Stanford.

In 1917, Hoover was appointed Director of Food Administration and Lou had learned to speak eight languages, fluently. When America entered World War 1, Hoover helped conserve America’s food supplies by rationing that became known as Hoovering, so there would be amble food for the soldiers. In 1921, he fed twenty million starving people in Russia. Hoover became Secretary of Commerce under two presidents, During his tenure, he became anxious about the speculation that was happening in the stock market and asked President Coolidge, several times, for more regulations over financial institutions to prevent insider trading and margin buying. Instead, the Federal Reserve board dropped the re-discount rate to 3.5 percent the fueled more speculation. He also supported stopping discounts being given to smaller banks but that continued to grow also.

In 1928, when President Calvin Coolidge declined another term in office, fifty-three-year-old Hoover became the nominee for the Republican candidate for president. Some of the party regulars were not happy at his nomination because Hoover had never served in congress and was outside the political loop.

1. We Can Overcome Mistakes

Herbert lost both his parents at a young age and ended up living with two different relatives during his formative years. He was an average student that had failing grades in some of his classes. But as a teen, he worked for his uncle in a land development office and became interested in that field. He could have told himself that he had not applied himself in school and probably did not have a chance of passing the entrance exams. Instead, he studied very hard and passed, just barely. He made the most of his college classes and became a young millionaire. Sometimes in business, we might make mistakes that hinder our ability to succeed but if we look at them as setbacks and not a roadblock, we can learn from them to make better judgments. Most successful people learned by doing and did not allow mistakes to be their defining moment. They built on them instead of turning them into handicaps and learned to overcome mistakes.

2. We Can Overcome the Past

Herbert not only lost his parents but his siblings too when they were separated into different families. In essence, he lost his family. Bitterness and anger could have turned him against the world but he chose to get involved in an occupation that interested him and turn it into a successful career. In the same vein, sometimes in business, we lose significant people. Maybe they were co-workers that we leaned on or an influential member of our team. Maybe they left in a negative circumstance. Bitterness and anger will fuel our resentment and hinder our potential so it is to our advantage that we overcome the past.

3. We Can Overcome Uncertainties

Because the rug was pulled out from under his feet by the death of his family unit when he was a boy still in need of nourishment, Herbert grew up shy, sensitive and introverted. This situation held the ideal conditions to develop hesitations about close relationships. When he met Lou during his senior year of college, he graduated and left without any future commitments. After he secured a prominent position, he thought of her and decided to make her a part of his life. As a result, he acquired a family that was his for life. Sometimes in business, people may disappoint us and do things that make us hesitant to trust anyone else. Yet business is built on relationships between producers, marketers, and consumers. To protect ourselves, we can start by seeking those who have earned good reputations to overcome our uncertainties.

4. We Can Overcome Challenges

Once the Hoovers moved to China, the Boxer rebellion erupted, causing the deaths of many Foreigners. The outsiders had to fight for their survival. Not only did Herbert join the action but also his wife learned to shoot and protect herself. Even after the military from several countries arrived, the foreign citizens helped to maintain their safety. Sometimes in commerce, it feels like our business gets attacked and we have to battle for its survival. The constant need to maintain correct procedures due to regulations, taxes, and paperwork requires us to work overtime and tests our endurance and patience. As a small business owner, many of these responsibilities constitute a challenge. Big businesses hire professionals who do much of the labor but the ultimate responsibility still falls on the shoulders of the owner/owners. There are many sources available to help entrepreneurs with these problems so no one should be afraid to start a business and overcome challenges.

5. We Can Overcome Habit

Even though the economy was not healthy when he became President, Hoover was confident that he could help it to become robust. Then eight months later, the stock market crashed and the economy spiraled downwards and collapsed the people into poverty. Since he had helped the European nations after the war, President Hoover tried to use the same tactics to help America. His repeated calls for local, and state volunteers never materialized. The problem was, the depression was so pervasive, everyone needed help and there was no one to volunteer. Sometimes in business, we rely on the same tactics until they become a habit. As long as routine remedies the situations, it is to our advantage to use them. But on occasion, a unique situation happens that requires a different approach and we need to see that before the business suffers a failure from our unwillingness to deviate from the established pattern. We can overcome habit.

6. We Can Overcome Blame

Even though Hoover--as Secretary of State—had warned other politicians and two presidents about the dangers of speculation, no one listened. Yet when the Great Depression hit eight months into his presidency, the population blamed him for the severity for refusing to use the power of the Federal Government even though there were many in congress that agreed with him. Regardless, he became an elderly statesman who served in world organizations and became an advisor to world leaders and U.S. presidents. Likewise, sometimes we have to make unpopular decisions despite the enormous opposition that confronts us. But to make those kinds of decisions, we have to be absolutely positive that there is no other choice. But if negative outcomes cause us to get blamed, it will help us to remember that focus shifts from day to day and it will not last. Keep in mind that we can overcome blame.