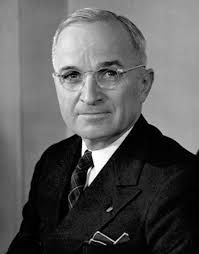 Harry was the first child born to John and Martha Truman on May 4, 1884. His father, John, was a farmer and livestock trader who had moved his family to Independence, Missouri, that was east of Kansas City. Two more children were born, his brother Vivian and his sister Mary Jane. As a child, Harry did not make friends easily. He wore thick glasses and was told by his doctor not to play sports to keep his glasses from breaking. His mother did not allow him to play rough games so he turned to music and reading while dreaming of becoming a soldier. In his fifth grade class, a little blond girl with blue eyes became one of his few friends. Her nickname was Bess.

Because of his penchant for reading, he was a hard working student and graduated in 1901 with Bess. His heart was set on attending West Point but his poor eyesight prevented him from being accepted. Even though he was academically eligible to attend a four-year college, his family’s financial troubles prevented him from applying. He dropped out of a small Business College to work in a mailroom, then as a timekeeper for a construction company and finishing as a bank clerk. Eventually, he went home to help his father and brother on the farm, doing manual labor and keeping the books. When he was twenty-one years old during his farm years, he joined the National Guard that gave him relief from farm chores and time for male companionship. He worked with his father and brother for over ten years but the 600-acre farm never produced any profit. Here are some business lessons we can learn from Harry.

1. Find the Positive In Not Fitting In

As a young boy, Harry was told by his doctor and mother not to participate in active sports because of his glasses. He yearned to join other males in their camaraderie and dreamed about becoming a soldier. When he became old enough to join the National Guard, he did so and became a military leader. Sometimes it takes a handicap, such as not fitting in, to jumpstart a desire that turns into a goal that brings about success. There have been many stories of average children turning a weakness into a lifelong achievement.

In business, successful entrepreneurs have risen from all walks of life, including the economic underprivileged. It was the burning desire to become financially successful that was the motivator. It was the tenacity to undergo extreme hardships and still achieve the same level of accomplishment that was the measure of success. Whatever our past circumstances, we have the same possibilities if we choose to find the positive in our handicaps, like not fitting in.

2. Find a Way To Make It Happen

When he was thirty-three years old, Harry was too old for the draft so he gathered a group of men that were considered unruly and formed an elite National Guard regiment. Overseas, their performance in battle was considered top-notch and Truman was promoted to captain. After returning home after the war, most of the men remained friends for life. This time, his age was considered a handicap. Today, there might be instances when a law might prevent us from accomplishing our goals. The idea is to work within the framework of the law to obtain our objectives. If it is against the law, then we need to find a way to make it happen, like Truman did.

3. Find a Way To Make Failure a Success

After the war, Harry opened up a haberdashery, a men’s clothing store, with one of his buddies from the war. They borrowed several loans from different institutions but ended up losing the business after three years. It took him many years to pay off his share of the debt. Some might consider his venture a huge loss except he gained more than he lost. During his tenure as a businessman, he joined several business organizations that gave him the opportunity to network. He developed genuine friendships and good acquaintances that helped him get elected to many positions.

In our modern day lives, it is important to understand that failure is when we fall then refuse to try again. Even if our ventures do not succeed, we leave knowing much more than when we began. Our next venture has a better chance of succeeding because we now have experience to build on and know how to make our failure a success.

4. Find a Way to Keep People That Matter

Ordinarily a private person, Bess stepped into her President-husband’s office when he asked her to. She was an intelligent woman and some politicians feared her influence over the President. She reassured the public she did not make political decisions but still, there were many objections to her official duties as his aide. President Truman relied on her clerical skills and advice in the midst of a world war and he refused to be swayed by their discomfort.

There may be times when the people we hire at the top level need our support. Once we have determined they are a genuine asset, with honorable intentions, it is our duty to use their skills despite the qualms of others. Whether they look like an executive-in-the-making or an ordinary housewife, we have the leadership responsibility of finding a way to keep people that matter.

5. Find a Way To Make a Decision

Harry Truman stated that his first year of being President was “a year of decisions.” To prevent a loss of over an estimated 200,000 American soldiers and thousands of Allied soldiers, President Truman dropped the controversial Atomic bomb on Hiroshima and Nagasaki that literally flattened both cities into rubble. It stopped World War II instantly but the technology was stolen by the Soviet Union and spread to China and other countries. As a result, a sense of danger developed between the nations that did not exist before.

Although businesses do not need to fear a bomb being dropped on their building from other businesses, there is a sense of tension between big businesses because of fierce competition. Owners are on the lookout for new technology and ideas that might advance their sales but many harmful products have been put on the market that are disguised as wholesome and consumers are aware of this. As owners, we need to find a way to make a decision that will give financial benefits to the company while being honest to the consumers we serve.

6. Find a Way To Keep Going

At the end of his first term, President Truman’s popularity had sunk to new low. Many people considered his presidency to be over. Determined to serve another term, he and Bess traveled thousands of miles on a Whistlestop tour where he campaigned from the back of a train. The Chicago Tribune, so sure of his defeat, pre-published a title that read “Dewey Defeats Truman” on the main page at the end of the election. President Truman won by a slim majority and had his picture taken with the headline.

It pays to endure, especially in business. Many major companies, before they became national, were in dire situations but the owners were determined to survive the new low. They pulled their resources together and found a way to keep going.

Once the atomic bomb was made known, the Soviet Union opted to steal the technology. The democratic nations joined forces while the communist nations lined up together. Both sides were afraid to initiate war for fear the other side would drop the atomic bomb on their cities. Instead, there were a lot of threats and denouncements. Sometimes, the United States made the Soviet Union look foolish to the world and vice versa. The first exacerbating crises between the two world powers came when North Korea—a communist country—invaded South Korea—a democratic country—and caused immense tension in the world. The United States and the Soviet Union fought each other indirectly by helping their ideology country with supplies and armaments. In the end, North Korea lost the war and was forced to return the lands they had acquired. There were other major conflicts that could have turned into a hot war such as the Cuban Missile Crises, the Vietnam conflict, and the Berlin Wall. Somehow, the world leaders were able to keep a cool head and compromises were made without starting World War III.

There are many instances in business where companies will butt heads with each other and intense emotions are involved. That is the principle of free market where competition is the driving force. As part of a democratic society, there will always be other companies that will be at odds with our own. As owners and stockholders, we are responsible to maintain a professional attitude towards the conflicts that arise everyday regardless of circumstances or emotions. Negotiation is the first priority in solving issues. Failure in agreement will lead to other tactics but must be accomplished with a cool head.