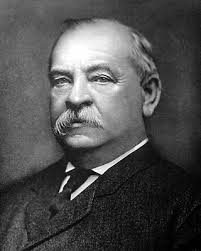 When Grover Cleveland was born on March 18, 1837, in the village of Caldwell, New Jersey, his new home already included four siblings. As the years passed, four more arrived so Grover grew up in the middle of nine children. Their education was sporadic but all of it was obtained from the local common schools. His impoverished family moved from New Jersey to the state of New York, first to Fayetteville and then to Clinton. The family relied on their father, the Reverend Richard Cleveland—a Presbyterian minister—to feed and shelter them. To their dismay, he passed away and left the job of nourishing the younger siblings to their mother, Ann Neal Cleveland.

Grover who was sixteen and ready for college, elected to help his mother by moving to New York City and working alongside his older brother who was employed at the New York Institute for Special Education. Later, he moved to Buffalo, a city at the opposite end of the state, to work as a clerk in a law office. While there, he became a part-time student by reading the law books that were available. Without a formal education, in 1858, he was accepted into the bar. As a lawyer, he was noted for his hard work and keen memory. He could present arguments from memory regardless of how important or how many people were in attendance. This trait was what lead him to the Presidency. Here are some business lessons we can learn from him:

Grover grew up being the middle child of nine siblings. His father was a preacher who did not bring home enough money to support them in comfort. Just the opposite, the family were borderline impoverished and everyone had to work hard to keep the family fed and clothed. As a result, Grover grew up learning to be self-sufficient. At the same time, his religious parents taught him to be honest. Those were the hallmarks that lead him to become president. Most people grow up in families or circumstances that were challenging. It is up to us to use the strengths that we learned from our youth to build a strong foundation that will help us succeed in our personal and professional life. Some of the most famous and successful entrepreneurs in the business world were people who went through many trials and hardships. They used skills learned from their backgrounds to accomplish goals that brought them success.

When Grover was a young man, he got a job in Buffalo, New York as a clerk in a law office. Instead of bemoaning his lowly station as clerk, he took advantage of his circumstances by reading books that taught him the principles of law. Even though he was able to take a few courses, the majority of his learning was done from working with lawyers and reading their books. Without any formal training, he was able to pass the bar exam and become a lawyer himself. Sometimes situations present themselves that can make a difference in our business life. If we choose to learn from them, we put ourselves in a position to do a better job. The more we improve our skills, the better our chances are of being promoted or creating our own business.

3. Be Willing to Work Hard

One of Grover’s chief characteristics was his ability to push himself to the limit. Many positions were extended to him because of his dedication to hard work such as becoming the district attorney. His reputation to work harder and longer than anyone else got him voted to several high positions starting with sheriff, then moving up to mayor and governor. As president, he worked late into the night or early morning hours to get the job done. Entrepreneurs are known for those same qualities. Behind the scenes, they follow the same pattern of working harder and longer than anyone else. To be successful in any business, especially as an owner, hard work is the anchor that produces results. Not only that, but hard working entrepreneurs recognize that quality in others. If an appropriate attitude comes with it, we can be one of those who get promoted or climb our own ladder of success.

Controversial decisions were the hallmark of President Cleveland’s presidency. Not only was he known for his political record of vetoing hundreds of bills but he also became known for his personal choice of marrying a woman that became the youngest First Lady at the age of twenty-one. In the eyes of many, the relationship was scandalous since he had become her benefactor after her father’s death. Not only did she fulfill her duty as White House hostess in proper form but she became so popular she was mobbed at public events until security guards were placed around her. There are times when we have knowledge about people and circumstances that renders us more capable of making business or personal decisions rather than listen to the opinion of others. It is up to us to follow-through for the sake of the company or business we are charged with. Even a small position needs a leader who knows what is needed, makes a decision, and acts on it.

5. Be Willing to Stand on Principle

In order to prevent pork barrel waste in government spending, President Cleveland vetoed 584 bills during a time when presidents were reluctant to oppose or offend the legislative branches. The consequence of that was a weak executive branch. One of the reasons President Cleveland was able to stand in extreme opposition was because he was grounded in principle. He strongly believed that government should not be wasteful or corrupt. As a result, the citizens were grateful and trusted him. In business, the same rule applies. Grateful, trusting customers are the result of honest, ethical businesses. The motto for the local Walmart Stores in Arkansas was “Lowest Prices Anytime, Anywhere”. The principle behind that slogan was that Sam Walton wanted to help people save money so they could have better lives because of the financial struggles he had witnessed. The people were grateful and trusted his stores. When the company went national in 1970, the New York Stock exchange listed it two years later. We can take that as an example that it is a good idea to stand on principle in business.

6. Be Willing to Go Against the Grain

When he became president for the second time, President Cleveland found that the majority of congress supported the Silver Act that he believed deepened the depression. Against the grain of most politicians and citizens, he admonished its pitfalls. With determination, he was able get the Sherman Silver Purchase Act repealed. In business, there will be times when the choices we make are not popular. It is more difficult when the right choices we make are subject to disagreement and ridicule. Yet for the sake of the business, sometimes we need to be willing to go against the grain.

7. Know When to Bend the Rules

The depression became so severe, workers across the country appealed to the President for public work projects that could employ them. Soup kitchens were overwhelmed with the number of people standing in line and each day, the situation worsened. President Cleveland did not believe the federal government could solve the nation’s economic problems and he did not want to create a population that was dependent on the government so he refused their requests. Although he worked with the Treasury Department and other lawmakers to help alleviate the hardships, the people turned against him, the politicians abandoned him, and history records him as having been a decent president but not a great one. In extra-ordinary circumstances, sometimes a business has to overlook the rules of the bottom line to focus on the need. Overall, strong business ethics are required for a successful company but in those rare moments of charity, rules will not break if they are bent.

Another reason historians do not consider President Cleveland a great president was because of his inconsistencies. The social policies towards the Negros, Native Americans, Chinese, European Immigrants and women were all dissimilar. Because of it, favoritism was evident. Foreign countries were also subject to different treatment. While some were protected, others were ignored. In business, inconsistency creates confusion and resentment. Instead of working together, employees work against each other at the cost of productivity. Tension becomes the norm as blame becomes the focus and the turnover rate increases. Businesses can progress when the rules are consistent. Behavior becomes professional and the atmosphere becomes conducive to customer care. As we strive to build a quality business, we need to remember that a strong building block has to be consistent.