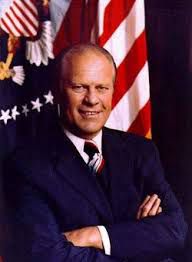 Gerald Rudolph Ford, Jr. was born 14 July 1913 to Leslie Lynch King and Dorothy Ayer King, nee Gardner. The infant was named Leslie Lynch King, Jr. Because of the elder King’s alcoholism and abusive behavior, his wife left him sixteen days after Ford's birth. Dorothy King took her young son to the home of her parents in Grand Rapids, Michigan, divorced her abusive husband within the year and, less than three years later, married Gerald Rudolff Ford who was a paint company salesman. “Jerry Jr.” took his name from his stepfather although his name was not legally changed until he was twenty two years old. King, Sr. is believed to have seen Ford only once while he was in high school.

The Ford family of Grand Rapids was a closely knit unit. Jerry had three younger siblings and was unaware of his biological father’s existence until he was seventeen years old. Ford was a local sports hero, having been elected captain of his high school football team where he played offensive center. (That’s the guy who snaps the ball to the quarterback!) He was also an avid Eagle Scout. Ford graduated from South High School in 1931, having been voted Most Popular Senior by his classmates. His prowess on the field helped him win admission to the University of Michigan where he was chosen the Most Valuable Player of the Wolverines, Michigan’s football team. He graduated from Michigan with a degree in economics. He was scouted by both the Detroit Lions and the Green Bay Packers football organizations but chose to attend Yale University.

Ford had worked at a local restaurant as a teenager in high school; held a series of jobs to help pay for college; was a solid student and football player. It was football that helped to make his college dreams a reality. Yale needed an assistant football coach, Ford needed a job. In 1935 he took the coaching job, making $2,400 a year. Two of his charges on the gridiron were future senators Robert Taft, Jr. of Ohio and William Proxmire of Wisconsin. Ford did not lose sight of why he was at Yale, however. Although it wasn’t easy he managed to win admission to Yale Law School, on a trial basis, in 1938. He graduated in January 1941 in the top third of his class. Some of his law school cronies included future Supreme Court Justice Potter Stewart, future Secretary of State Cyrus R. Vance and future Peace Corps Director R. Sargent Shriver. Ford also met and fell in love with Phyllis Brown, who was a student at Connecticut College for Women. Although they shared what Ford described as “a torrid four year affair,” their romance ended when Ford returned to Grand Rapids after graduation and Phyllis remained in New York.

Jerry Ford returned to Michigan in 1941 open a law firm with his future White House counsel man Philip Buchen. The business was a success and Ford had time to increase an interest in politics. He supported Wendell Willkie’s run against President Franklin D. Roosevelt in 1940 and became active politically in Grand Rapids where he joined a group of Republican reformers called the “Home Front.” Their focus was to oppose the local Republican machine headed by Frank McKay, an arrogant and imperious boss.

Ford enlisted in the Navy following the bombing of Pearl Harbor. He was called to active duty in April 1942 and served a full four years. He took part in several major battles which won him ten battle stars and showed him to be a good leader and officer. A “whew” moment in his career occurred when he was nearly swept off of the deck of the light aircraft carrier Monterey during a typhoon. The war gave Ford a new view of life. He came away from the fighting a committed internationalist, believing that the United States had a major role to play in world affairs.

Life is, generally speaking, what we choose to make of it. Business should be no less. Even with the best laid plans opening day will be chaotic. Just remember, everyone was new at something, once.

It is necessary to concede that things do not always travel along the path we think we are walking on. For seventeen years Gerald Ford knew who he was, and then everything changed. Even the most outwardly stable business can experience wrenching changes and not every contingency can be planned for. The rigid tree snaps, the flexible one bends with the elements. Be flexible. Be open to change. Be successful.

Gerald Ford wanted to go to Yale, wanted to marry Elizabeth Ann Bloomer, wanted to be President of the United States. It wasn’t easy but he was considered “an innately decent and good man” and he attained his goals. The plans inherent in a business model may make the future look secure. In a business that is sustained by working with people, however, security is the least stable commodity. Cracks appear and have to be patched. Scandal, uncertainty, betrayal, all can shake a business to its very foundation. Common sense, integrity and honesty will shore up the shakiest organization. “Expect the unexpected” is a cliché and should be the mantra of every business.