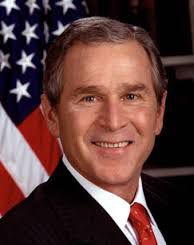 The son of the forty first president of the United States was born in New Haven, Connecticut, in 1946, while his father was finishing his sophomore year at Yale University. The baby was christened George W. Bush but soon came to be known as Georgie to his family. His upbringing was modest, considering his lineage was as close to aristocratic as Americans become. The Bushes lived at 37 Hillhouse Avenue, New Haven which was a warren of apartments that had been carved out of a single house. The tenants were all veterans, their wives and children, a total of forty people in a space that was originally designed for a single family. The elder Bush had already given thought to what he would do after college.

The Bush family moved ahead with their dreams growing Zapata Petroleum into a thriving business. They moved into a larger house, with a pool out back. Georgie grew up as a happy child whose life was rooted in tragedy rather than innocence. Those around him knew that he understood that life is fleeting. He lived for the moment, with careful daydreams about playing baseball. He took advantage of opportunities as they came along, never looking back and not obsessing about the future. One day, one step, at a time was fast enough for George W Bush.

Always ready to play baseball, Georgie played Little League for the Central Midland Cubs, with Big George as his manager. He played at Yale where he never rose above relief pitcher for the junior varsity but back in Midland he was good enough to make the Midland All-star team as a catcher. He played all the way through school and was remembered, by his teachers and principals as the boy who was always ready to get a game going or to just catch the fly balls that the Principal at Sam Houston would hit to the boys.

Georgie, following the path taken by his father and grandfather, attended prep school, in Houston and in Andover. He matriculated at Yale, finishing with a BA in history, class of 1968, and Harvard Business School where he earned a Master’s degree in 1975. Between the two college programs he served in the Texas Air National Guard; training to fly F-102 fighter planes with the 147th Fighter-Interceptor Group. Upon receiving his master’s and avoiding being drafted, he returned to Texas with an honorable discharge. He formed Arbusto Energy in 1977. In 1982 he changed the company name to Bush Exploration. He was known as a socially active, hard-drinking bachelor, until he met Laura Welch, a Midland public school librarian.

Although baseball was still his first love, Bush ran for Congress in 1978. He won the Republican primary but lost to Democrat Kent Hance in the general election. He then gave all his energies to business using the nest egg he stored away when Bush Exploration was bought out by Harken Energy Corporation to assemble the syndicate that purchased the Texas Rangers baseball team. Bush and his partners put together the public financing which built the state-of-the-art ballpark in Arlington Texas. The stadium made the enterprise financially successful and made Bush a rich man. He’d invested $600,000 and cashed out at $15 million. He’d been respected as an owner and when he chose to go into politics, Georgie was supported financially by many in the sport. During a tour of the stadium in Arlington Bush told a reporter: “When all those people in Austin say ‘He ain’t never done anything …’ Well, this is it.”

George W’s first political victory came when he ignored the scathing remarks made about him and his family by then Governor Ann Richards. Bush refused to sink to her level of name-calling and class-biased attacks. He ran a disciplined campaign with a tightly controlled message and defeated Governor Richards with 53.5% of the vote.

Soon, Governor Bush realized that he was a talented schmoozer and used his skill to share credit, where it was due. He befriended Texas House speaker Pete Laney and Lieutenant Governor Bob Bullock who were both Democrats. Together the trio passed statutes on tort reform, welfare recipient work requirements, and statewide public education accountability standards. At the same time they liberalized the law to provide easier reimbursement for medical care, authorized 48-hour hospitalization after childbirth and provided legal protection for physicians who filed written complaints against HMOs.

“Owner name And Son” used to be a source of pride in the business world while “President and Son” has only happened twice in the history of American politics. Now corporations, with names of their own, don’t leave much space on their letterheads for the “And Son(s)” designation except in the small cities and towns where Mom’n’Pop businesses still fight for survival. There are advantages to having clout behind the scenes but the person up front is still the one in the spotlight. George W attended the types of schools his father and grandfather had graduated from. He served in the military although he never went to war. Then went his own way and bought a baseball team. This process works in the business world also: maintain the status quo while incorporating new ideas that will help the company prosper. Ensure that the person “out front” has the charisma to keep prior customers coming back while enticing new business.

Not all the reviews will be positive, but if they’re reviewing what a business is doing, then they are paying attention to was a business is doing. George W ignored the scathing remarks aimed at him and his family and became Governor of Texas. Each step brought a renewed understanding of his talent for getting along with and making friends with those around him. Any well run business will be guided successfully by the person who understands that no one succeeds in a vacuum and that there will always be detractors and critics. What one person says about another does not define the character of the target but rather speaks volumes about the character of the speaker. Step through the negativity, with style and grace, and carry forward with positive ideas and practices.

George W Bush was so successful as governor that his party members from across the country traveled to Texas to meet with him. He stood out as the man to beat in the upcoming presidential race. The style of action is as important in the business world as the product being sold and the sales process being utilized. A customer base should be allowed to grow based upon the product being offered and the style and grace with which that offer is made. Doing one’s best with a view toward service and usefulness has led to the fulfillment of many a businessperson’s dreams. Positive action will draw in a larger audience although negative actions won’t necessarily go unnoticed. People will talk. The successful business will do what it can to make certain that the talk is positive.

What does one do when one wakes up and hears the news that the country (or the business) is under attack? First, make certain of the facts. The morning hours of September 11, 2001 were filled with confusion and misinformation. Next review all available information as it is presented. Stabilize the situation as much as possible. Then, create a plan to succor the survivors while keeping an eye on what needs to be done to repair what can be repaired, prevent a repeat and, when called for, plan retaliatory action. Businesses can only do so much to protect themselves. Having recovery plans in place for computer crashes, espionage, fire, accidents and natural disasters forms a spot of solidity in the midst of chaos. Give the situation time. Take a deep breath. Let the adrenaline leech away as too rapid a response often leads in the wrong direction.