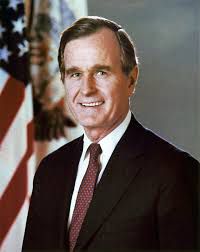 George Herbert Walker Bush was born into a family with a tradition of public service, on 12 June 1924 in Milton, Massachusetts. His parents were Prescott Sheldon Bush and Dorothy Walker Bush who moved the family to Greenwich, Connecticut when George was still a boy. Prescott, an investment banker, and Dorothy were wealthy but taught their children to be modest, stressing the importance of public service and giving back to society. Prescott was a Republican senator from Connecticut from 1952 until 1963.

Despite the ideas of modesty, George left home to attend Phillips Academy Andover which was an exclusive boarding school in Massachusetts. While there he was elected captain of the baseball and soccer teams as well as senior class president. He graduated on his eighteenth birthday, in 1942, enlisted in the Navy the same day and served until September 1945. In July 1943, George became the youngest pilot in the Navy, flying fifty-eight combat missions during the war. His plane was shot down on 2 September 1944 while flying a missing to bomb a radio site. He was plucked out of the water by a US submarine and eventually awarded the Distinguished Flying Cross for heroism under fire.

While at a country club dance in Greenwich, Connecticut during Christmastime, 1941, Bush met Barbara Pierce whom he married on 6 January 1946. The couple had six children: George Walker (1946- ), Robin (1949 – 1953), John Ellis (1953- ), Neil (1955- ), Marvin (1956- ) and Dorothy (1959- ). Bush was discharged from the Navy in September 1945 and enrolled at Yale University, a single wave in the ocean of World War II veterans who flooded the colleges and universities after the war. He graduated with a degree in economics in 1948, having studied on an accelerated program that still left time for baseball, and membership in the Skull and Bones, an exclusive secret society.

Bush moved his family to Midland, Texas upon graduation and began working in the oil industry as a salesman for Dresser Industries which was owned by an old family friend. In 1950 Bush and a partner formed an oil development company of their own which merged with another company to form Zapata Petroleum three years later. In 1954 he became president of Zapata Off-Shore Company, a subsidiary which developed offshore drilling equipment. Shortly afterward he moved his family to Houston, Texas.

Bush became the Republican Party chairman in Harris County, Texas which began his political career. He worked hard to reinforce his image as a conservative and was able to cultivate relationships within the Republican Party. He had always been good with people and those relationships helped him throughout his political career. In 1964 he ran for a US Senate seat against the incumbent Democratic Senator Ralph Yarborough. He ran a hard campaign but was hampered by charges of being a Northern carpetbagger. The struggle was indicative of the uphill battle he waged as a Republican in Texas against the strength of the local Democratic Party. In November, while Democrat Lyndon Johnson was elected President Republican George Bush was defeated by a margin of 329,621 votes.

In 1966, running as a moderate Republican, Bush won a seat in the US House of Representatives from Houston’s Seventh District by more than fifty percent of the vote. He served two terms and then eyed another run for the Senate believing that he would be running against Ralph Yarborough who had defeated him in 1964. However, Yarborough did not win the primary. Bush ran instead against Lloyd Bentsen, a conservative Democrat. The Democratic Party was still strong and Bush and Bentsen did not differ greatly on the issues. Bush lost, again.

President Nixon nominated Bush as US Ambassador to the United Nations in December 1970. The Senate confirmed Bush over the objections of his critics who said that he lacked sufficient experience. Although not a part of Nixon’s inner circle, which weakened his effectiveness at the UN, Bush used his tenure to make influential friends within the US government and among the foreign policy establishment. It was during this time that Bush began to assemble the legendary Rolodex of names which served him so well in years to come.

“Money is the root of all evil.” Is it better to have money and be taught to live modestly or to have to strive for every dollar, to learn how to live modestly? George Bush understood the concept of modest living and giving back to the community while not having to actually live through the rigors most Americans face while learning the same lessons. He worked, he served in a war, he remained true to his roots, and he prospered.

Those who inherit a business care less for it than those who have to build one up from the dirt. However, if taught well, a young executive will learn from his or her predecessors and keep the business going in a profitable direction. A major lesson in all of this is not to want too much too soon. Businesses fail when the owners withdraw funds that would be better served buying supplies – it happened often in the mid-eighties. If one is in business simply to make money that business will never prosper.

Even the largest companies have been known to take on more than they can handle. A wise choice is to discover what one is good at, use that to form a business model, and stick with it. Ideas of expansion should be turned into bettering the product – as George Bush did with his schooling and the steps he took in his political career. Diversity is useful, if it is used to increase the knowledge base of the original design. A successful business utilizes the capabilities of its employees, studying and learning from their input. In many cases the employee has better knowledge of the grass-root function of the business than the upper executive. That is why presidents have cabinet members. No one can be everywhere at once.

George Bush held many jobs, in various cities around the nation. Being flexible allows one to meet new people, and gather new ideas. In the business world this equates to conferences and business meetings. These gatherings, while allowing for a break from the day-to-day business of business, should also be mined for the wealth of information and contacts they contain. Rather than planning to be at the head of the table the astute businessperson will sit or stand quietly and listen to the ebb and flow of ideas. Make friends among those who would be competitors as well as among those who would be supporters. A successful business needs a modicum of good competition – people enjoy having a choice.

4) Have Fun Along The Way

Most people in the medical field know and agree that children need to play in order to learn useful skills. Adults tend to forget this in their quest for prosperity often to their detriment. Several of our Past Presidents played sports in high school and college. The Kennedy family used to toss the football around during their gatherings. Bush played sports, fought in a war and attended dances – where he met his future wife. Senior executives meet on the golf courses to discuss business. The progressive employer has built or remodeled to include an area within the company building where the employee can go to unwind on a treadmill, track or pool. Adequate time for vacations and days off without penalty will go far in retaining a healthy workforce. Remaining healthy is a great deal less expensive than getting healthy.

Ultimately being President of the United States is just a job. As with all jobs, even this one comes to an end eventually. There are Presidential Libraries, monuments in stone, books, recordings, plaques and busts. George H W Bush worked with Bill Clinton to found and organize a fund to assist the victims of flooding in Southeast Asia. People may not remember what a person says or does but they will always remember the way someone made them feel. In business the legacy of satisfied customers will be the tool that a business will need to continue to prosper.