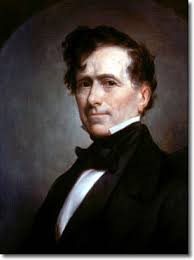 And now we come to Franklin Pierce, another president mostly forgotten by the average American. His life, like those of other somewhat obscure presidents, demonstrated his remarkable gifts that somehow didn’t translate well into the presidency. It was also a life fraught with tragedy.

Born at Hillsborough, New Hampshire, on November 22, 1804, Pierce was the son of a frontier farmer who had been a Revolutionary War soldier and state militia general. Pierce attended school at Hillsborough Center and the Hancock Academy in Hancock, New Hampshire. He transferred to Francestown Academy in the spring of 1820, seven miles from home. He grew so homesick there that just after he entered the school he walked home barefoot. Soon, after a few sharp but encouraging words from his father, Pierce walked the seven miles back to school. He finished his education in Bowdoin College. An extrovert who enjoyed being the center of attention, Pierce fell into a period of irresponsibility and recklessness with his new college friends. The boys formed a faux military company and made him the captain. The company was notorious for their pranks and more than once Pierce came close to being sent home in disgrace. Despite these wayward beginnings, he became the President of the United States. Here are a few business lessons we can learn from him.

1. It’s Never Too Late to Fix Your Mistakes

For his first few years in school, Pierce made many mistakes, preferring raucous company of his wild friends to studying. He then made a good friend who persuaded him to take his schooling more seriously and turned his life around, graduating among the top ranks of his classmates. You will probably make some mistakes in business, but don’t let these destroy the rest of your career. Make amends, apologize, and fix your mistakes. Then press onward, never looking back.

Franklin Pierce lost his first case, but he promised himself that his loss wouldn’t deter him. He said that if his clients would let him, he would fight a hundred cases until he won. This sort of perseverance is an excellent trait in anyone, especially someone in the business world. You will probably fail at least once, but failure doesn’t have to be the end.

Pierce fell into alcoholism to assuage the wounds left by the death of his children and his deteriorating marriage. In the end, he died alone from results of that bad habit. We can learn from his mistakes and conclude that turning to vices is not the answer when the hard times come. Find some sort of constructive, healthy activity instead. Improve yourself. Build your skills and develop your talents instead of tearing yourself down.