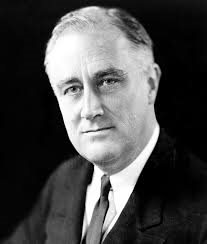 The Roosevelt ancestors made their fortune from real estate and trade. One of the descendants, James Roosevelt, was widowed and married a young and beautiful debutant, Sara Delano. As part of the privileged class, the couple lived at Springwood estate in the Hudson River Valley about fifty miles north of New York City. Hundreds of workers were employed to keep their home and farm land in top condition. On January 30, 1882, they became the parents to Franklin Delano Roosevelt.

Because he was an only child, there was plenty of attention given to young Franklin from his mother who spent considerable time raising him along with several nannies. In addition, there were tutors and governesses who taught him until he was fourteen. At times, he traveled overseas with his parents. His father was not a disciplinarian but spent time with Franklin riding horses. He was the center of many people’s attention and developed a great sense of self-importance. During his adolescents, his father James developed a heart ailment.

His cozy world changed when he was 14. He was sent to a private Episcopal school for boys in Massachusetts where he became one of many. Groton School was an elite educational institution that powerful and wealthy families sent their sons to. It was designed to teach young men mental and physical strength. Franklin found it very difficult because he did not fit in with the other students. His entourage of female attendants had taught him to be congenial and please adults. Even though he was 6’2”, he was not athletic or strong-willed so he was not accepted into the top, social hierarchy of his schoolmates. The person most influential to him, outside of his mother, was Endicott Peabody who taught the boys to help the less fortunate through public service. He grew to admire his cousin, Theodore Roosevelt, who came on campus to visit his friend, the school’s rector.

Theodore Roosevelt was elected President in 1900, the same year Franklin was eighteen and entered Harvard, determined to make something of himself even though others considered him average. Within weeks of entering college, his farther passed away. Afterwards, Franklin spent considerable time on the college newspaper and in the Alpha Delta Phi fraternity while sustaining a C average in his classes. In his second year, he proposed to a Boston heiress but she turned him down. Not long afterwards, he was traveling on the train to the Hudson River Valley when he met Eleanor, his fifth cousin once removed.

He ran for the New York State Senate. He ran as a democrat from a family of strong republicans and in the republican stronghold of Dutchess County, New York. Because of his name, money, and promise to clean up the government, he won by over a thousand votes. It was 1910 and other Democrat candidates also won that turned the election into a Democratic landslide.

Before the end of his second term, Woodrow Wilson—whom he had supported to become President—asked him if he wanted to be the Assistant Secretary of the Navy. He said yes immediately. FDR, as he was known, loved his job with Louis Howe as his assistant. It was evident by his energetic administration of the daily business and ceremonial activities. He became more aggressive in trying to shape the policy of the Navy and advocate for it to become larger, both the prerogatives of the Secretary.

In 1918, he toured US naval bases and battlefields in Europe—a year after the United States entered World War I. FDR later served as Assistant Secretary of the Navy for seven years and had founded the U.S. Naval Reserve. It was also a year after World War I and he was nominated for Vice-President. Louis Howe reached out to Eleanor and shared his responsibilities of reviewing speeches and public statements, enticing her into the political arena. James Cox lost the presidential bid and FDR became vice president of the fidelity and Deposit Company. In 1920, many businesses were raising capital from millions of Americans by encouraging private investment or selling stocks. At the same time, many other Americans were being duped by get-rich-quick schemes.

In 1921, when he was 39-years-old and vacationing with his family on the island of Campobello near Maine, he went for a cold swim then hiked two miles back to his vacation home, extremely tired, he went to bed and fell asleep. The next morning, he woke up with a fever and his left leg was numb. Doctors diagnosed it as polio, a terrifying viral disease that had affected his spinal column. He was almost totally paralyzed but refused to believe the damage was permanent. Determined to overcome his illness, he tired several therapies and worked hard at swimming and exercise. Eventually, only his legs remained paralyzed. With the support of his family, especially Eleanor who was his main caregiver, he continued numerous rehabilitation therapies to overcome his crippled condition.

Franklin’s vigilant and painful physical therapy during the years helped him to walk short distances by swinging his hips to move his braced enclosed legs forward. He was stern about not being seen in public with a wheelchair, which he needed most of the time. He reentered the public domain by writing public statements about current issues and rebuilt his reputation with the powerful Democrat leaders by corresponding with them.

In 1928, FDR ran for governor of New York and won. His progressive agenda followed the ideas of Theodore Roosevelt by initiating social programs for a fair society. In October of 1929, the stock market crashed and by the next year, its economic downfall took a toll on the citizens of New York. Roosevelt set up temporary agencies that helped one out of ten households find jobs, lowered taxes for farmers, created public works programs, and relief for the needy. He was reelected for governor but two years later, before his term was up, he was nominated for the president. He conferred with a group of college professors, nicknamed the Brain Trust, to help him create public policies that would help alleviate the mass suffering. FDR broke protocol by flying to Chicago to accept the nomination in person but he needed to show the country he was strong and capable despite his body that was not. It was his charm and upbeat approach to the Depression—he called the New Deal—that helped him get elected with 57% of the popular vote. President Herbert Hoover received only 59 electoral votes while FDR won with 472. Here are some business lessons we can learn from him.

1. Business Must Have a Leader

Franklin Roosevelt grew up being a mama’s boy. Even after he married, his mother overwhelmed his new bride when she decided where they would live and how to decorate the interior of their new home. Later, his mother got in the way of Eleanor and her children. His mother even influenced many political decisions that Franklin made. His unwillingness to stand up and become his own man was the beginning crack of his marriage. Her loss of respect towards him added to the tension. When he cheated on her, she overthrew him and his mother to become her own woman.

In Business, we have to stand up as the leader. Advice and counsel are appreciated but the ultimate decisions need to be made with our own standards. Parents, relatives, and friends do not have the stake in our business like we do. We can lose the respect of our employees and associates if we are weak. There will always be those who think they can do a better job of supervising than we can. If we don’t take the leadership role, someone else will and we will be left holding up the pieces because a business must have a leader.

2. Business Must Be Positive

Franklin Roosevelt was elected as President of the United States because of his positive attitude on how to deal with the Great Depression. He conferred with college professionals who understood economics that helped him develop a course of action.

He kept his charming personality and was positive he could win the challenges of campaigning and becoming president without the stigma of being crippled with polio and spending most of his time in a wheelchair. He was right. Even though he was obsessed with learning to walk again and spent millions to do so, he did not let temporary failures upset him. He continued painful treatments for many years with the belief that he could overcome his handicap and never faltered. From sheer will power, he was able to develop the skill to stand and take a few steps despite his ravaged muscles. He used these skills many times in the public eye.

People believed in him and trusted him because he talked with an air of confidence. He believed in himself, that he was capable of the unthinkable. They had no idea he had marital problems, mother problems, or health problems.

In business, sometimes we need to have that air of self-confidence, that anything is possible. Even when we are struggling with problems, we overcome hurdles by doing everything we can to alleviate them. We talk to professionals who can help us with a course of action. We stay positive by focusing on the possibilities, not the handicaps. We do what is necessary even when it is painful. We use sheer will power if need be, to develop skills that we can use in the public eye. We believe in ourselves so others will believe in us. In other words, we stay positive because our business needs to be positive.

The stock market crashed, millions of people lost billions of dollars in speculation, millions of breadwinners lost their jobs, millions of acres of farmland were lost, thousands of banks closed their doors, business and industry became non-existent, and a nation of hungry, poor people looked to the President to solve their problems. These were serious times that called for serious solutions and President Roosevelt put in action many programs that became questionable. He, with the help of congress, attacked the problems of the banks, the financial markets, corporations and stock markets, relief agencies to help the unemployed, public work projects, farm credit, rural electricity, and recovery reforms. When the economy showed a slight uplift, they added more agencies that gave concessions to labor, new controls over banks and public utilities, higher taxes on corporations, and added social security. There were critics who claimed a dependent population was being created, that the federal government was turning America into a socialist state, and that some of the legislation was unconstitutional. Even though these programs did not have the desired results of ending the Great Depression, it demonstrated to the population that the plight of hungry people was important. It gave a sense of hope that something was being done and incentive to hang on just a bit longer.

In business, sometimes that is all that customers need to know, that someone cares and something is being done. The results may not be what was expected but the fact that their need was acknowledged and cared for makes a difference. Sometimes situations inside the business is so serious that drastic action is required and yet, some feel too threatened to take action for fear of making mistakes that will destroy the company. Regardless, business must take action.