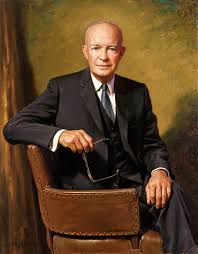 The ancestors of Dwight were Mennonites who escaped the Roman Empire in the 17th century. Hans Eisenhauer brought his family to Pennsylvania in 1741. David Jacob Eisenhower was transferred to Denison, Texas as a railroad worker in 1892. Along with his wife, Ida, they were Mennonite pacifists who opposed war of any kind. The couple, with their two little boys, lived in a small house by the railroad tracks when Dwight was born on October 14, 1890.

When he was a year and a half old, his father moved to Abilene to work at a creamery. Despite the family being very poor, Dwight had a happy childhood until he was six. It was marred when his three-year old younger brother died and the house became somber. Eventually, the happy home returned and Ike—his nickname—formed positive memories that he cherished for the rest of his life. Because the family was in need, Ike learned to work hard by helping in the creamery and selling vegetables outdoors. Still, he and his four brothers had time to go hunting, fishing, and play football and baseball.

In high school, Dwight was an average student and his favorite class was military history. He graduated in 1909 but his parents did not have the finances to send him to college so he and his younger brother, Edgar, made an agreement. Ike would work to support Edgar in college and then in two years, they would switch work and school. Ike went to work in the evenings as a fireman but two years later, when it was his turn for college, he opted out to attend West Point Academy that had free tuition. Both of his parents were members of the Church of Brethren in Christ that opposed war but they agreed to allow Ike to attend the soldier school. While there, Ike was a football star until knee injuries forced him off the field. He disappointed his teachers with his average grades and they expected nothing more of him except to be an average officer. His choice of friends included like-minded souls. They smoked, played cards, and Ike liked to play practical jokes on them. He graduated in 1915 by being commissioned a second lieutenant.

He was stationed near San Antonio, Texas where he met eighteen-year old Mamie Doud. She was 5’1” and he described her as, “a vivacious and attractive girl, smaller than average, saucy in the look about her face and in her whole attitude.” When she was seven, her businessman father had earned enough money to retire the family at their large home in Denver, Colorado and the summers near relatives in San Antonio. Growing up with three sisters in comfort, she enjoyed good clothes and jewelry but her businessman father also taught her the value of money, budgeting and finances. Mamie became conscientious about the cost of items and learned how to save money.

1. A Business Principle Is To Focus On Learning

In military school, Ike enjoyed extracurricular and off-campus activities to the point he did not study like he could have. As a result, he graduated as a second lieutenant and none of his instructors expected more of him than to be an average officer. During World War II, he was disappointed that he did not get sent overseas where promotions were expected. Frustrated that his career had stalled, he was given a second chance by being accepted to command school through the mentorship of General Fox Conner. This time, he took learning seriously and graduated first in his class that elevated him to important assignments and quick promotions. As a five-star General, he led the allied invasion against Germany.

There are times when we need to take training and/or learning seriously. Even though we may be considered bright or smart, it makes little difference if we don’t perform up to our potential. Business is an entity that gives credit to those who perform well, not those who have exceptional skills and talents that are not used. When it is essential, a business principle is to focus on learning.

2. A Business Principle Is To Remain Accountable

As a Junior Officer, Eisenhower was under the leadership of Douglas MacArthur who he disagreed with on many issues. Nevertheless, he carried out his assignments to the point General MacArthur retained him when he was transferred to the Philippines. Eisenhower was promoted to organize the training of the Filipino troops that led him to other promotions.

In Business, marketing feedback from customers is necessary to gauge any problems. Then we are accountable to resolve any issues and maintain a healthy environment because a business principle is to remain accountable.

3. A Business Principle Is To Investigate

Before the D-Day invasion, a fake military base was established using cardboard and plywood materials with inflatable tanks and vehicles. A fleet of rubber boats was tied down in the Thames River. General George Patton, whom the Germans respected, was in charge of the base and heard extensive communication being relayed. The Germans were fooled into believing the fake base across the channel was being readied for a Pas de Calais landing. Had the Germans looked closer, they would have seen the hoax.

In business, it is important to take a close look at dealers and distributors to ascertain that they are genuine and back up their claims in writing. A business can lose revenue if they invest in a fake company that gives nothing in return. For that reason, a business principle is to investigate.

High winds and heavy clouds affected the accuracy of landings and bombings in Normandy but that was a risk the allies took in landing under unfavorable weather conditions. On the other hand, none of the allied leaders had prepared for hedgerows that were bushes that lined the fields to mark boundaries. The Germans had been preparing for months in the mazes while allied soldiers died when they got separated and lost while others were unable to help each other, not knowing who was where. The hedgerows prevented large-scale attacks by the allied soldiers but helped the Germans kill aggressive soldiers by firing hidden machine guns and mortars.

In business, it is up to employers to seek feedback on workers. Are the working conditions conducive to personal productivity? In other words, do they have enough supplies, do they possess the correct skills, and do they function at competent standards? Are they sufficiently happy? To prevent a high turnover rate that will cost the business money; a business principle is to investigate.

4. A Business Principle Is To Maintain Proper Relationships

From his administrative assignments, Eisenhower developed the skills to maintain stable relationships with powerful or opposite personalities. After command school, even though he had never engaged in active military command, he used basic business principles to manage tough world and strong military leaders from several countries to work together. We maintain proper relationships with different personalities by developing the skill to work with others. The mission statement of our supervisors needs to be understood and carried out. Our subordinates need to have clear understanding of what needs to be accomplished and how it is to be done, then allow them the freedom to achieve it, while maintaining authority under trying circumstances. In the military or in any business, a basic principle is to maintain proper relationships.

5. A Business Principle Is To Have Measurability

A major strategy of World War II was spitfire planes that flew over German-held territories at close range. Pilots took pictures of suspicious landscape and activities. As a result, major installations where rockets and guided missiles were built—and pointed towards England—were destroyed, preventing overwhelming loss.

There are tactics to prevent disasters in business. Without measurable feedback, profits and budgets collide or get lost and mired in inept practices. To measure profits and compare it to budget gives us a complete picture. We can stay on course by knowing where and how budget is spent to prevent overwhelming loss. That is the reason a business principle is to have measurability.