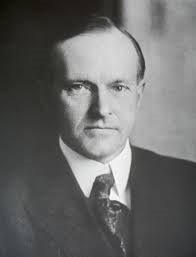 The Coolidge linage started in America around 1630 in Massachusetts. Most of its members survived the Revolutionary War and one of the descendants; John Calvin Coolidge was a quiet, stern man who became a successful farmer. He bought a general store and became a tax collector and peace officer. He married Victoria Josephine Moore and served in the Vermont House of Representatives for six years and a number of years in the Senate.

Their son, John Calvin Coolidge Jr., was born on July 4, Independence Day in 1872. His birthplace was Plymouth Notch, Vermont. The young John helped his father on the family farm and general store where he was taught to be frugal and respect business. His ambition was to grow up and be a storeowner. When he was twelve-years old, his gentle mother died. He carried a lock of her hair to remind him that he would join her someday. A year later, he went to Black River Academy in Ludlow, Vermont. Several years later, as a teenager, his sister Abigail, whom he was very attached to, died also. Some people believed the two deaths advanced his somber personality. In 1890, he graduated from Black River Academy and people commented on how similar he was to his father: quiet, honest, industrious and conservative.

He ended up in Northampton, Massachusetts where he worked in a law firm and had access to books that he read law from. He passed the bar in 1897 and opened up a law office while he started dabbling in Republican politics. Even though in private he was extremely introverted, his public speeches propelled him from State Legislature to State Senator, Lieutenant Governor, and then Governor of Massachusetts.

Young Calvin, who was twelve years old, lost his mother and then when he was a teenager, he lost his sister. He had been very close to both of them. He grew up to be like his father who was quiet, industrious, and honest. As a young lad, he had dreamed of becoming a storeowner but the deaths of the two closest women in his life was a setback that could have stalled his dreams forever. Instead, he rose above his lonely circumstances to move up to hold the highest position in the land, the President of the United States. In life, there are many kinds of setbacks that affect everyone, even those who are very successful. It is a choice we make. Without the fortitude to move upward and onward, we will never have the chance to make a success of our personal lives, our spiritual lives, or our business lives. It is imperative that we try to overcome setbacks.

Calvin Coolidge was a very quiet man who got flustered when too many strangers surrounded him. Even after serving in many public offices and becoming president, he still suffered severe social anxiety that caused him to stop talking because even the effort of small talk became too much. Yet he persisted in running for offices from the city to the national level and performed his duties in such a way that he was elected time and again. Sometimes in business, we can experience those same kinds of anxieties and fears. Yet it is to our advantage to persist in moving forward into whatever positions that advance our growth. We learn as we accept new challenges and become more competent as we gain the experience that put us on a new footing. Despite any handicaps that we have, it is not impossible to achieve success if we try to overcome negative personality traits.

Lemira Barrett Goodhue was Grace Coolidge’s mother. She did not like the taciturn young man that Grace brought home and tried to discourage their courtship and their marriage. Even when Calvin Coolidge progressed from one leadership position to another until he reached the presidency, she never tried to befriend him and only visited the White House once during the first inaugural celebration. As a result, she did not receive the full benefit of being related to the President. Sometimes in business, we turn our backs on people that are not to our liking or because they are different from what we are used to. As a result, we lose out on potential benefits they might bring us, such as different experiences, new perspectives, and diverse approaches to problems that could have been ours had we worked harder to overcome prejudices.

Grace Coolidge had to take a backseat to her husband’s career many times. When he was a member of the Legislature and worked in Boston, she was left home alone with her young boys in Northampton. She had been an only child growing up so she needed guidance to raise her two sons. Instead of standing around helpless, she turned to her local minister and relied on his guidance to give her direction. In business, there will be times when we will experience rough patches that will have us standing still, looking for answers. It is to our benefit not to stand still for too long but to take advantage of what help is available surrounding us. It may be personal, spiritual, or professional people that have the answers we are seeking. Regardless, being stopped in our tracks need not be a problem if we try to make do with the people that we know.

President Coolidge distrusted interacting with foreign nations that could potentially lead to trouble and he had no interest in personally being an emissary, especially with his introverted nature. Instead he granted authority to his cabinet to represent the United States’ interests. As a result, two of his cabinet members earned the Nobel Peace Prize. Many suggestions have been made to be bold, brave, take charge and lead with determination. These are all successful strategies but there are times when it is necessary to delegate authority. Especially if other people have the skills to write proposals, market the product, improve production, direct personnel, and oversee transportation. If the business is bigger than we are, then we need to delegate authority.

A year after President Coolidge left office, the Great Depression hit the country with a barrage of economic problems. After the great prosperity of the Roaring Twenties, people wanted answers and needed to blame something or someone for the great disasters. Most fingers pointed towards the ex-President and he admitted that he had avoided the big problems of his presidency like not limiting the excessive economic surge and not helping the depressed agricultural and industrial markets. There will be times in business when the economic forecasts do not materialize and profits go down or disappear. We are left with two choices. If we deny our part in the disaster, then the problem will continue to exist or swing upwards. If we admit our mistakes, then we have the freedom to change course and change the direction of the outcome. As hard as it is to do, we have to try to admit mistakes.