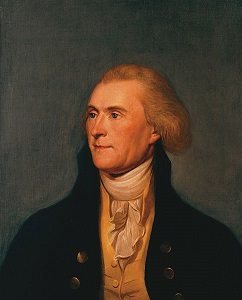 Thomas Jefferson once said, “I cannot live without books.” His was a life full of learning and knowledge, which he later put to use as one of the founding fathers of the United States. His education was made possible in part by the high social status into which he was born. His father was a plantation owner and his mother belonged to one of the most prominent families in Virginia. His connection to people of wealth and power allowed his access to the finest tutors and at the age of nine Jefferson began studying Latin, Greek, and French. He would later learn Gaelic, a language spoken in parts of Britain and Ireland. He learned horse riding, the violin, history, mathematics, and science. While Jefferson is best known for his contributions to the founding of our country, we can also learn significant business lessons from him as follows:

Thomas Jefferson loved books from an early age. He knew that within them was knowledge required to get where he wanted in life, and without that knowledge he was powerless. He learned five languages and many other skills from careful study of the many books at his disposal. He established a university so others could learn as he had and make their own changes for good in the world.

In Jefferson’s days, information was much harder to come by than it is today. Imagine what he would have thought of the Internet. If Jefferson, with the limited resources that were available to him in his day, accomplished so much, imagine what we today can do. The knowledge that fuels a successful entrepreneur is ready to be accessed, and it is all around you.

Jefferson was always curious about the world around him. He learned about the world and used his knowledge to solve problems. Later, when he was president, he sent Lewis and Clark on a journey of discovery that changed the American West forever. You may never know what opportunities await you as an entrepreneur unless you first go out and look for them. It’s not likely that you can sit on your couch and wait for opportunities to show up at your doorstep, begging for you to use them. Explore the world, or at least get out of your comfort zone and see what things await you.

Status quo is Latin for “the way things are.” Though Jefferson never made it quite clear how he felt about the matter, he questioned the practice of slavery in his time. He saw the evils and the problems associated with it. You can’t solve a problem unless you first realize the problem is there, and that requires you to question things first. Is there a better way to do something? Could things run a little more smoothly? Could someone work better somewhere else? Answering these questions may help you solve problems you wouldn’t have even known were there.

4. Become Good at Many Things

Thomas Jefferson was a musician, a scholar, a diplomat, a writer, and a philosopher. Because of his diverse experience, he was better prepared to face many of the challenges the world threw his way. You shouldn’t limit yourself to just one area of expertise. When you have more than one talent, you have a better chance at succeeding; this is even truer now in today’s world than it was in Jefferson’s. The Internet and new technologies are reshaping traditional skills, and so it helps to have a wide educational understanding and broad experience. It’s also handy to be good at many things in case a job in one area falls though; you can keep trying with your other talents.

Jefferson didn’t write the Declaration of Independence by himself. There were four others on the committee in charge of writing the declaration, and though his was the primary task of writing the draft, he allowed others to have significant input. When Benjamin Franklin changed a key passage, Jefferson didn’t throw a fit or insist his was the right way. He recognized that others had good ideas as well. Group projects and other joint endeavors can be challenging, especially when the participants have varied ideas and beliefs, but that can be better than a group of people who all think the same: it allows people to consider others’ ideas, which might be the best for everyone. Have patience and listen to the opinions of others.

6. Resolve to Make a Difference

When Jefferson was appointed to the Continental Congress, he didn’t mean to go just as an observer. He knew that he if was going to the gathering, he was going to make a difference, so he sought out the most influential people and got to know them so he would have a chance to be heard.

As the saying goes, life isn’t a spectator sport. You accomplish nothing by watching from the sidelines. You must be proactive and go claim your success, no matter how hard or uncomfortable that success may be.