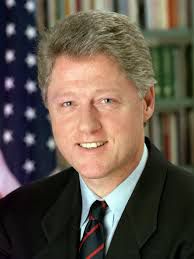 William Jefferson Blythe III was born on 19 August 1946, in Hope, Arkansas, three months after his father, William Jefferson Blythe Jr., died in a traffic accident. The young Bill spent his early years being raised by two strong women: his mother and his grandmother, Edith Cassidy, although his mother was often away, taking nursing classes in New Orleans. His grandmother taught him to read as she tried to shape her grandson’s character. Bill remembered loving them both although often caught between them during their arguments.

In 1950, when Bill was four years old, his mother, Virginia Cassidy Blythe, married Roger Clinton, of Hot Springs, Arkansas and moved with him to Hot Springs. Roger Clinton was an abusive alcoholic who sold cars. Again, Bill found himself in the middle of the arguments. (Virginia divorced Roger when Bill was fifteen although she remarried him soon afterwards). In high school, he took his stepfather’s name, excelled in his studies, played saxophone in the school band and fell in love with the gospel music of his Baptist faith. He also developed a passion for politics. His Faith and his love for the music sent him to church each Sunday while his mother went to the racetracks. Within his community he was recognized as a talented and ambitious young man.

Bill Clinton attended Hot Springs High School, a segregated, all-white institution which stood above most Arkansas public schools. It was presided over by Principal Johnnie Mae Mackey, a third strong woman in Bill’s life, who staffed the school with teachers that would turn out leaders who thought of personal success in terms of public service. Bill Clinton became her brightest protégé, becoming one of the two who were sent to Washington D.C. as Arkansas delegates to Boy’s Nation which was an imitation political convention sponsored by the American Legion. The seventeen year old Clinton was photographed shaking hands with his political idol, President John F. Kennedy in the White House Rose Garden in July 1963. That photograph became a symbol of unity between the Kennedy 60s and the Clinton 90s. Clinton’s mother had always told him that he would be President. Following that historic meeting, Clinton became determined to fulfill his mother’s dream. (Virginia died of cancer in 1994 but lived long enough to see her son inaugurated).

After he graduated from high school in 1964, Clinton left Little Rock to attend Georgetown University in Washington D.C. While majoring in international affairs he covered his expenses through scholarships and part-time jobs. University life wasn’t easy as the student body of the Catholic-sponsored institution looked down upon the outsider from backwoods Arkansas. The clique of students who ran the school newspaper wouldn’t let him write articles but his energy, good looks and personality combined to push him to the top in the student government. He was president of his freshman and sophomore classes. He tried for president of the Student Council in his junior year but was soundly defeated due to his own miscalculation: he looked too political to his peers, and they elected his lesser-known opponent.

Clinton worked for the US Senate Foreign Relations Committee starting in his junior year. The committee was headed by Senator J. William Fulbright of Arkansas, a leading critic of U.S. involvement in the Vietnam War. While working with the Senator, Clinton began to believe that the US had no moral or strategic reason for being in Viet Nam. Just prior to graduation in 1968 Clinton won a Rhodes scholarship to study at Oxford University for two years, an award that almost got away from him as a change in foreign policy eliminated nearly all college deferment. He received his draft notice while at Oxford. Through persuasion and luck Clinton managed to dodge the draft, although he was never comfortable with having done so. He participated in numerous anti-war demonstrations while at Oxford the details of which resurfaced in 1992 during his bid for the presidency. Clinton remained in the Rhodes Scholar program and made many contacts but his coursework did not result in the completion of a degree.

Clinton entered Yale Law School in 1970 and received his law degree in 1973. While at Yale he met Hillary Rodham whom he married in 1975. Clinton worked on the 1970 Joe Duffy campaign for the US Senate and he managed the Texas campaign for George McGovern who lost Texas in the Nixon landslide. After graduation Clinton returned to Arkansas where he taught law at the University of Arkansas in Fayetteville. He entered the political arena in Arkansas by running for a seat in the US House of Representative against incumbent Republican John Paul Hammerschmidt. Although Clinton was defeated he came very close to winning the race, giving Hammerschmidt a run for his money such as the Congressman had not experienced in twenty-six years. Suddenly, people began to notice Bill Clinton.

Two years later he was elected State Attorney General and at age thirty-two he became Governor of Arkansas, one of the youngest ever US governors. His home state was not impressed by him however. His youth and inexperience caused him to make several missteps including the mishandling of rioting Cuban refugees, the raising of auto licensing fees to pay for road construction and alienating the state’s timber interests by intervening in the practice of clear-cutting. As a result of all this, the voters turned him out of office, thereby making him the youngest former governor in America’s history.

Young Bill Clinton’s life was not what most people would consider an easy one. Having adults come and go can be very confusing to a child. In the same way, a business that does not have a strong foundation can be confusing to the employees. It is far better to have a goal and a workable plan for reaching that goal before opening the doors. This allows for motivational interactions with the employees, a way to instill a sense of purpose. A well-worded statement of intent – “I am going to run for president” – allows everyone concerned to work together toward the common goal.

Nothing worth having comes easily, whether as the president of a company or as the President of the United States. “Hard work” though, is a relative term. No matter how arduous a task is, if performed with a measurable purpose, the completion of that task is a great morale booster. Bill Clinton developed a passion for politics as a teenager, assisted, no doubt by the opportunity of meeting, and shaking hands with President John F Kennedy, whom he greatly admired. Meeting one’s idol may not always be possible but the drive to do so can fuel great accomplishments. In the business word a good thing to remember is that a task may not be hard if given to the correct person.

His passion for politics led Bill Clinton through many jobs. His intelligence earned him a Rhodes scholarship. School wasn’t easy as he was often considered an outsider. One step at a time, and a little bit of luck, helped move Clinton along. Slow growth may not appeal to a businessperson but it is often the path that leads to bigger things. Using each lesson learned as a stepping stone to the next level can help to ensure that each part of the process is complete. Shortcuts often lead to missteps and can be costly both in time and resources. Whether starting a company from the ground up or working one’s way up through the ranks, the advice is the same: take one step at a time.

His energy, good looks and talent for rhetoric often pushed Clinton beyond the obstacles in his life. At times he was considered too much or not enough by those around him: his home state of Arkansas elected him governor but was not overly impressed by his youth and inexperience. Innovation comes from those who are willing to be different or willing to keep going in the face of opposition. There were a number of statements made over the years that were negative reactions to things like telephones, television, automobiles and computers. Listen to the opinions of others, another form of potentially useful knowledge, but don’t allow the negative thoughts of your competition and opposition to prevent your success. No one is going to be accepted by everyone, that’s human nature. A successful business only has to be accepted by those for whom the product being offered is useful.

Bill Clinton used the tools of television, leaflets and telephone call centers to promote his ideas, to get those in the Arkansas legislature to fall in line with his policies and to poke fun at his blunders, using the platform of the Tonight Show starring Johnny Carson to repair his image before a large, late-night, television audience. In direct contrast to President Nixon who tried to cover up his wrong-doing, President Clinton withstood the scandal caused by his misconduct with a White House intern and then apologized to the nation, again on television. His willingness to take responsibility for his actions helped him maintain a positive image.

Businesses will make mistakes. Trying to cover them up generally causes more problems as the truth is very difficult to hide for long. Clients and customers consistently prove to be more faithful to those they perceive to be as human as themselves. Not every mistake needs to be trumpeted from the rooftops but those that effect the client base ought to be admitted and dealt with openly, honestly and swiftly.