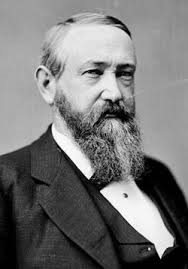 Generations of influential men were the predecessors of Benjamin Harrison. Back in England, Thomas Harrison was a Lieutenant General who signed the death warrant of King Charles I. Later, Thomas Harrison was beheaded and his descendants immigrated to the New World. They settled in Jamestown. Benjamin’s great-grandfather whose name was also Benjamin Harrison was one of the signers of the Declaration of Independence. His grandfather, William Henry Harrison was the ninth president of the United States and his father, John Scott Harrison, was a member of the House of Representatives.

Benjamin was born in 1833 in his grandfather’s home and raised adjacent to his grandfather’s estate on a 400-acre farm. His professional habits impressed enough people that his clientele grew. He partnered with William Wallace and their business prospered as they accepted all types of cases, giving Benjamin experience in different types of laws.

With experience, he developed an effective speaking voice that facilitated his job as an examiner. He was noted for his cogent—clear, logical, convincing—style. Instead of being aggressive, he was courteously persistent when obtaining disclosure from witnesses. Before the appellate court, his briefs were strong and precise. With these skills, he advanced to international law and was effective enough to stand with the most able lawyers in the country. This background guided his journey to the Presidency and here are some things we can learn from him.

Almost all of the previous presidents were avid readers dedicated to learning. Most of them learned the skills of being a lawyer through apprenticeship and reading law books belonging to other people versus formal education. As influential as Benjamin Harrison’s family were he still had to rely on his own initiatives when he was a child. It was only after he had proven himself to be an astute learner that he was given the privilege of having a private tutor become his guide. In business, there are many aspects to a business that can be learned through reading. Anything from employee relations to product shipment can become knowledge to the fledging business owner or supervisor through research. Instead of depending solely on people to teach us the skills of our labor, we can get a broad or narrow outlook from the information we read.

2. Professional Habits get Us Noticed

Despite his cold, abrupt manner, one of the reasons Benjamin Harrison was singled out for advancement was due to professional habits. An acquaintance trusted him to share his office with him and he acquired many clients in the process. William Wallace accepted him as a business partner and they created a successful firm. He was advanced to a senator by the state legislature. He became president. In business, professional habits will get us noticed. If we are prompt, reliable, savvy, and future oriented, we put ourselves in a position to get noticed. Important clients and associates will deem it wise to use our services or products. The most successful business owners are those that developed professional habits that placed them at the top and kept them there.

3. Proper Budgets Keeps Us on Track

Along with products, the McKinley Tariff Act imported foreign money in the form of taxes. The surplus money in the United States Treasury became a fortune and congress acted like the US government was destined to receive an endless supply. They spent outrageous amounts and before long, the money situation tightened. When that appened, depression set in. To stimulate the economy, a monthly supply of silver was minted into silver dollars. The huge quantity lowered the value of silver and the depression worsened until the party lost the elections. Sometimes in business, profit surpasses what was expected. A proper budget will prevent overspending and keep our business afloat in crises. Tomorrow is never a sure day where many disasters lurk. A proper budget will keep us on track and keep our doors open.

Despite his many talents as an intellectual thinker and an engaging speaker, President Harrison’s biggest weakness was his cold, abrupt manner. He never learned the art of making others feel comfortable in his presence. Too important or too busy to slow down and engage people in conversation cost him the support of his party even though his wife, Caroline was adept at socializing. In business, we can lose the support of others by becoming too critical, demanding, and impatient. As a result, we lose the support of people who could make our jobs easier, faster, and more profitable. Today we deal with numerous people on a regular basis that remind us how important social skills are.