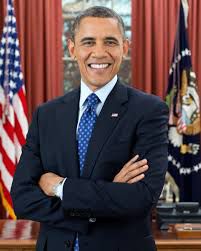 Barack Hussein Obama II was born, on 4 August 1961, to University of Hawaii graduates Barack Obama Sr. and Ann Obama, nee Dunham. Barack Sr. was from Kenya, Ann was from Kansas. He left the family when his son was two, studied at Harvard University for a time and then returned to Kenya where he died in an automobile accident nineteen years later. After her divorce from Obama, Ann married another foreign student, Lolo Soetoro from Indonesia. For the four years between ages 6 through 10, Barack lived with his parents in Indonesia, attending Catholic and Muslim schools. As an adult, Barack remembered: “I was raised as an Indonesian child and a Hawaiian child and as a black child and as a white child. … And so what I benefited from is a multiplicity of cultures that all fed me.”

Stepping out of his parents footsteps, Barack moved to the mainland to attend college. He spent his freshman and sophomore years at Occidental College in Los Angeles, and then moved to Columbia University in New York City. He graduated from Columbia in 1983 with a political science degree remaining in New York an additional year, working for Business International Group, before accepting a position as a community organizer in Chicago’s South Side – a neighborhood which is largely black and poor. Barack’s efforts met with some success but realizing that he would never be effective without a law degree he enrolled at Harvard Law School where he excelled as a student, graduating magna cum laude and winning election as president of the Harvard Law Review for the 1990-1991 school year. He won the election by persuading the journal’s conservative staffers that he, a liberal, would treat their view fairly. It is widely acknowledged that he did just that. Barack’s tenure as the first black president of the Law Review led to a contract from Random House publishing company to write a book about his experience with race relations. Dreams from My Father; A Story of Race and Inheritance (1995) was written as a personal memoir which focused on Barack’s struggle to come to grips with being a black child raised by white adults.

In 1992 Barack married Michelle Robinson, a South Side native who had graduated from Princeton University and Harvard Law School. Michelle supervised Barack’s work at Chicago’s Sidley and Austin law firm where he worked a summer internship after his first year at Harvard. They had carried on a four-year courtship and, after the marriage, settled in Hyde Park, Chicago’s racially integrated, middle-class neighborhood. Both their daughters were born there, Malia Ann in 1998 and Natasha (nicknamed Sasha) in 2001.

Barack directed Illinois Project Vote, a drive directed at increasing voter turnout for the 1992 election. He then accepted simultaneous positions as an attorney with the firm of Miner, Barnhill and Galland, and as a lecturer at the University of Chicago Law School. In 1996 he launched his first political campaign, to replace state Senator Alice Palmer when she decided to run for Congress. When her campaign faltered she attempted to run for reelection but Barack refused to withdraw, successfully challenging the validity of her voter petitions. He won easily, once her name was removed from the ballot.

His time in the legislature was not an easy one. Republicans controlled the Senate while many of his black Democratic colleagues resented the tactics he had used against Alice Palmer. Barack adapted and developed cordial personal relationships with members of both parties also cultivating Senate Democratic leader Emil Jones, Jr., a black senator from Chicago who became his mentor. Obama was able to get finance reform and crime legislation enacted, even though his party was in the minority. In 2002 the Democrats won control of the Senate and he was able to pass close to 300 bills which aimed at helping children, old people, labor unions and the poor. His years of public service were based upon his steadfast belief in his ability to unite people around politics of purpose.

He made one serious misstep when, in 2000, he challenged US Representative Bobby Rush in the primary. Barack later realized that it was “an ill-considered race” in which he was soundly defeated by the voters. He was not nearly as well-known as Rush, a former Illinois Black Panther leader who was elected to Congress from the South Side’s first congressional district in 1992. Barack lost to Rush by a 30 percentage point margin. He later admitted that he had been soundly drubbed.

He returned to the state senate where he served for eight years. In 2002 he spoke out against President Bush’s plan to launch a war to depose Saddam Hussein, Iraqi dictator. In his remarks at an antiwar rally in Chicago, Barack declared: “I don’t oppose all wars. What I am opposed to is a dumb war. What I am opposed to is a rash war.” His brash statements put him at odds with other leading Democratic Senators with Presidential ambitions. These included Hillary Rodham Clinton of New York, John Kerry of Massachusetts, and John Edwards of North Carolina. Eventually people began to listen as the war declined in popularity. In 2004 he was elected to the US Senate by a record majority of 70% to 27% over Republican Alan Keyes. Senator Obama announced his candidacy for President in February 2007 at a rally in Springfield, Illinois, in front of the Old State House. This was the same venue from which Abraham Lincoln had given his famous “house divided” speech in 1858.

1) Change can be Good

What began with John F Kennedy continued with Barack Obama: first a Roman Catholic then an African-American. The United States was changing and its politics were being forced to change, just to keep up. The business world faces the same changes – demographics are not what they were fifty years ago. Trends come and go, styles change, old ideas become new again as each generation flexes its muscles and discovers its buying power. A strong leader, be he President or Chairman of the Board, embraces the changes, especially when his election or appointment generates the transformations and guides the successful endeavor in the new direction.

A solid education is the foundation of success. Notice the term “education” rather than schooling. Some of our most successful businesspeople never went to or graduated from college. It isn’t “book learning” but people skills that help a person move forward. And education doesn’t stop with a sheepskin mounted on a wall. There is always another book or magazine, another meeting or seminar, another training session. There are public opinion and employee suggestions. All of which should be treated with the same level of interest. One never knows which oyster contains a pearl until it has been opened.

Being the first black American president was challenging enough. On top of that President Obama stepped into an “official recession” and a Middle Eastern countryside filled with American troops trying to keep peace in a dangerous and unstable environment. Stepping into the shoes of anyone can be difficult; attempting to do it when the outgoing establishment left a mess has its own challenges. All too often new administrations, either political or business oriented, let go a number of employees whose skills will be difficult to replace. The more successful idea is to retain the people who know what they are doing, at least long enough to ensure a smooth transition and find out where the problem spots really are.

It was going to be difficult enough, being the first black President, without the self-serving rhetoric uttered by those once considers friends. I’m sure it wasn’t easy for candidate Obama to have to refute the sermon delivered by his pastor. The world is rife with people who’d rather steal the spotlight than do the work themselves. The business world is no different. Larger companies have safeguards and backups in place. Smaller companies can also protect themselves albeit not as easily. It is often difficult to recover from a serious set-back. The astute businessperson will enlist the help of all those in their employ – utilizing the talent pool which has kept the business going. As hard as it is to maintain a positive attitude it is almost imperative to do so in order to facilitate the flow of ideas which will help to heal the damage.

5) Work With the Opposition

Being able to work with one’s competitors and opposition is a skill of great value in the business world. Being able to build a relationship of mutual trust and cooperation will enable all parties to succeed while underhanded practices and unscrupulous behavior generally comes back to haunt the perpetrators. President Obama possesses all these skills. He never had a supportive Congress yet he was able to pass measures designed to better the lives of those he served. No two people view a situation in quite the same way, so putting all available heads together will generate ideas that one or even two people alone might not be able to do. An open exchange of ideas in an atmosphere where all are free to contribute, without fear of judgment or censure, will garner a set of workable plans and directives useful to all involved. Both parties benefit as will the clients they serve.