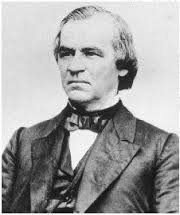 Andrew Johnson didn’t have the head start in life that many other presidents had. In fact, the circumstances of his birth were among the poorest of any president’s. John’s father was uneducated and provided for his family by becoming town constable in Raleigh, North Carolina. When Johnson was only three, his father rescued three drowning men and died shortly after, leaving Johnson’s mother Mary to support three children. She became a seamstress, but people from higher social circles often ridiculed the Johnsons as “white trash,” one step above slaves on the social ladder.

Johnson entered into an apprenticeship with a tailor, where he learned to read and write at age sixteen. Andrew and his brother William ran away to Laurens, South Carolina, where Andrew continued the tailoring trade. He fell in love with a girl, Mary Wood, and was so smitten with her that he asked her to marry him. Accompanying his marriage proposal was a quilt he had made himself. Unfortunately, she wasn’t as head-over-heels for him as he was for her and she declined the offer and the quilt. Dejected, John once again ran away and this time went to Alabama. After a time, he returned to Raleigh, where he rejoined his small family. The whole Johnson clan eventually moved to Tennessee, where Johnson would call home for many years. At only eighteen, Johnson married the sixteen-year-old Eliza McCardle, the daughter of a shoemaker. She helped him improve his reading skills. As he read, Johnson discovered stories of great politicians and his interest in the subject of politics grew. He organized a debate society with one of his customers, and soon helped organize a backwoods political party; neither the Whig nor the Democratic parties were well organized at that time in Tennessee.

From these humble beginnings Andrew Johnson rose to become the President of the United States when Lincoln was assassinated. Here are some business lessons we can learn from him.

Andrew Johnson was born into poverty and rose to become President of the United States. How did he do it? He was a self-starter who organized his own debates, which helped him get into local politics and prove himself. He continued to make a name for himself until he was elected vice president. Then, of course, unfortunate circumstances forced him into the seat of the president. If you don’t think you have much of a chance of becoming anything, you may have to be a little creative, but if Andrew Johnson could make it, you can.

Johnson was a Southerner, and at the beginning of the Civil War, the other Southern Congressmen resigned their seats to ally themselves with the Confederacy. But Johnson was more interested in preserving the Union than following his friends, and he took it upon himself to stay with the Union. It was an unpleasant task, especially when many of his former comrades considered him a traitor, but Johnson knew that sometimes duty is unpleasant. Like Johnson, you may need to put the overall needs of the company above your personal desires.

3. Work with What You Have

Johnson was made military governor of Tennessee during the war, and when the Union forces were diverted elsewhere, he was faced with the unenviable task of defending Nashville against Confederate raids. By taking harsh measures against Confederate influences in the city and raising his own temporary military force, Johnson managed to keep the Confederates at bay until Union armies arrived.

You may encounter situations that are not ideal, where you don’t have the help you need or when deadlines seem unreachable. Sometimes you just have to work with what you have. You may be surprised what you are capable of when you hunker down and do your best with your limited resources.

Opposition during his presidency and a subsequent impeachment led to a significant downturn in Johnson’s popularity, and he knew he couldn’t win re-election. Instead, he endorsed the Democrats’ replacement for him and graciously stepped down at the end of his term. He eventually ran for Congress and won, the only former president to be elected to the Senate. When you are passed over for a promotion or don’t get what you want, you probably won’t be doing anyone a favor, including yourself, by stewing about it and casting blame around.