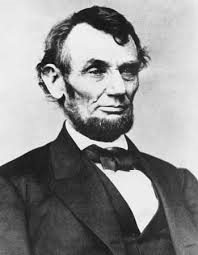 When Abraham Lincoln was a boy, he borrowed a book called Life of Washington from a neighbor. When he took a break from reading it, he stored it between the logs of his cabin. One day a hard storm came and soaked the area between the logs, turning the book into a soggy mess. Young Lincoln marched to his neighbor, apologized for the damage, and asked how he could pay for the book. After three days of hard work, he paid for the book and Life of Washington was his. It is very likely that when Lincoln read about the great American hero George Washington, he had no idea that he would one day be counted with Washington as one of America’s most beloved presidents.

Lincoln was born in 1809 in Kentucky to parents of humble means. They often moved from place to place, settling again and again in wilderness areas, sometimes because of difficulties obtaining the titles to their land and sometimes because they wanted to live in a territory without slavery. They lived in log cabins or simple huts with three sides boarded up. When Lincoln was only eight, his mother passed away. His sister cared for her little brother until their father married a second wife, whom Lincoln accepted as a new mother.

Sarah Bush Johnson Lincoln encouraged her stepson to read, and Lincoln found he had a knack for it. It was during this period of his youth that he obtained the book about Washington and other books, learning mathematics, grammar, and law. There was no formal education available, but Lincoln taught himself using shingles as paper, and reading in the light of a fireplace. He etched math problems into the back of a wooden shovel and sanded them off when he was finished. When he worked in the fields, or chopped wood, he took advantage of any small break to read. Then, when he was done with his work, he would stretch out in the old chair in front of the fire and read some more.

Lincoln's upbringing would lead him to the Presidency of the United States. Here are some of the business lessons we can learn from Abraham Lincoln.

As a boy, Lincoln accidentally damaged a book he borrowed from a neighbor. He claimed responsibility for the loss and sought to pay the neighbor back. He underwent days of hard work to pay for the book; on the frontier, books were expensive and hard to come by. You should follow Lincoln’s example and do what you can to take responsibility for your failures. Only then will people trust you enough to give you future opportunities.

We all know Abraham Lincoln’s reputation for honesty. His business dealings, though they weren’t terribly successful, were marked with integrity. The importance of honesty in business, though it probably doesn’t need to be repeated, cannot be undervalued.

Growing up on the frontier landscape of Kentucky, Lincoln had little educational opportunities, and yet he was known for his intelligence and learning. How did he achieve this? He took advantage of every chance he had to read. He read during breaks at work and when he came home so as to make up for any educational disadvantages he had.

Can’t afford an Ivy League education? Not a problem. Even if a traditional college education is difficult for you, there are many other chances to learn, including online programs. Be creative, search the Internet, and ask around to find other ways to learn.

If you’re afraid of a little hard work, it’s likely business isn’t the field for you. Being successful requires long days, late nights, and sometimes undignified labor. Abraham Lincoln knew this; long before he labored night and day in the White House to keep the Union from being lost forever, he split rails and hauled cargo down the Mississippi to earn his keep and secure his future.

Lincoln was against slavery, but he knew that simply releasing all the slaves at once would make it almost impossible to repair the Union because of the many political differences that existed in the country. He needed to keep the support of the border states, which still permitted slavery. So he first made the freedom of the slaves in the South a military goal, which helped the war effort and retained the border states. Only when the time was right did he move the country toward the total rejection of slavery.

Like Lincoln, You may have things you’d like to accomplish in the long term, but you may find you have to make sacrifices in the short term in order to assure that your bigger goals are realized.

Lincoln didn’t have the military experience that he needed to lead the country through this Civil War, so he learned all he could on the topic. He consulted his generals and borrowed books on military strategy from the Library of Congress. You may have a job that requires some rapid on-the-job learning; you shouldn’t waste time in figuring out what you need to know so that you can be an asset to your company.

8. Failure Happens; Deal with It

Abraham Lincoln lost several bids for public office, and yet he won the ones that mattered. He knew, as most great people do, that failure is nothing more than an early stage of success. You will probably fail several times in your business career, but as long as you succeed in the end, your earlier business failures won’t matter.